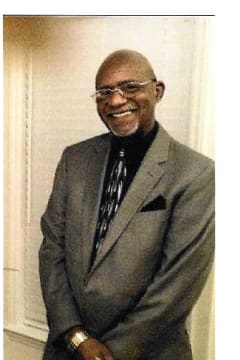 James Edward Fuller was born on December 5, 1943 in Sanford, NC. He was the only child of James Andrew and Minnie Covington Fuller Alston. He gained his wings on September 19, 2022 after a very long illness. He never complained nor once asked “why me?”. He was a joy to care for and made sure you knew he appreciated everything you did for him.

After graduation from James B. Dudley High School in 1962, he and a friend enlisted in the US AIR FORCE to see the world, which he did. He retired in 1988 as a Master Sergeant.

In 1992 James married Venoris (Jean) Jones, whom he dated for 10 years…thus beginning his second career! His job was to coordinate their relocation/move every time she was reassigned to a new position. And there were many (Illinois, Washington, DC, back to Illinois, Connecticut and Virginia). He said he finally retired when Jean retired in 2004 and they moved to Greensboro.

James lived life to the fullest and always had a smile for everyone! He never met a stranger and was always willing to give a helping hand.

James had many names: Meatball, Jim, Joe Fuller, Papa, Cousin, Uncle and Brother-in-Law, among others. He was our Florence Nightingale. No matter where we lived, whenever a family member or friend was sick, you could bet on him showing up to provide the necessary care. When each grandchild was born, he was there!

He was an active member of Dudley High, Class of 62 Alumna and the Air Force Retirees Club (AFRC) until his illness.

He was proceeded in death by both of his parents, Minnie and James.

Send flowers to the service of James Edward Fuller