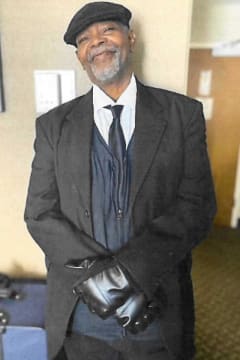 The Man. The Myth. The Legend. Very few people could survive the many challenges he faced, but he did so with unyielding faith in God, a constant praise on his lips, and an infectious smile on his face. It was not just his testimonies that set him apart though; he was simply… Extraordinary. On August 28, 2022, Larry Bernard Ashby departed this life and entered into eternal rest surrounded by family, friends, and the undeniable presence of God. Larry was born on July 30, 1954, in Richmond, Virginia to Shirley Mae Ashby and the late Charles Wright, Sr. At an early age, Larry relocated to Roanoke to reside with his mother and stepfather. The oldest of ten children, Larry was a role model for his siblings and assisted with their upbringing. Larry was educated in the Roanoke County school system and was a graduate of Patrick Henry High School. Upon graduation from high school, Larry entered the United States Army where he served as a sharpshooter. He toured in Germany before being honorably discharged. After leaving the Army, Larry moved to North Carolina where he met the love of his life, Linda. Larry and Linda shared 41 amazing years together, and Linda was by Larry’s side until the very end. Together, they raised two daughters, Tyronia and Ashley. Larry was also the doting grandfather to Ajee, Taryn, and Jaque. His family meant the world to Larry, and his devotion to them was evident to everyone he met and in everything he did. Larry worked in management positions for several companies, having retired from Office Depot due to illness. At each location, Larry’s warm personality, willingness to lead by example, and commitment to his team helped him excel through the ranks and obtain lifelong friendships with his staff and peers. Larry loved sports. Not only was he a huge fan of UNC, the Lakers, and the Dallas Cowboys, Larry was a beast on the basketball court. He also skated and obtained a third-degree black belt in TaeKwonDo. Serving God was Larry’s greatest passion. Larry was raised in the church and dedicated his life to the Lord at Garden of Prayer No. 7 in Roanoke, Virginia. Larry’s commitment and servant’s heart led him to being ordained as a Deacon at For the Love of God Fellowship in Greensboro, North Carolina. For the last 27 years, Larry has faithfully served as a Minister at Word of Faith Christian Fellowship under the leadership of Senior Pastor Darryl Beatty. It was Larry’s faith in God that kept a smile on his face for the last 17 years as he faced many health challenges. Despite the diagnosis and prognosis, Larry’s faith never wavered as he always said, “God’s got me!” Regardless of what he was going through, Larry never complained, never stopped smiling, and never stopped believing. Larry was an extraordinary man with supernatural faith, great compassion, a giving spirit, and love for others. He touched the lives of many with his megawatt smile and his ability to connect with others on many levels. Although he was a man with wide-ranging talents, he was never

Send flowers to the service of Larry Ashby

Honor the life of Larry Ashby