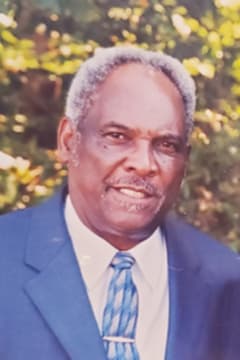 Deacon James McCoy "Coy" Smith, was born July 23, 1937 in Walnut Cove, NC to the late Rev. Everett and Blanch Smith. He departed this life well lived on Tuesday, September 14, 2021 at home surrounded by his family. Deacon Smith earned his wings over the span of 84 years by leading his family, serving others in the community and serving God. He loved his family, especially his grandchildren. He made all his children feel special and would sacrifice to make sure they had what was needed to be successful. His early years had him discovering the world as part of a close knit family. He graduated from the Walnut Cove Colored School in 1956. He would later enter the US Air Force in 1961 to serve his country as an Airman and mechanic honorably before returning home due to a disability in 1968. James was employed by RJ Reynolds and Stokes County Schools before retiring in 1994.

Deacon Smith loved the church where he served faithfully until his health declined. Throughout his adult life, James was an avid church goer where he was eventually ordained as a deacon at New London Primitive Baptist Church. He took his role seriously and sought to live by the principles of caring for the least of these as well as being a cheerful giver. It was important to him to maintain his offering and tithes, which he did religiously until the last month of his journey on earth. Deacon Smith loved to sing at church regardless if it were part of a group, choir or by solo. Praising God, to him, was a privilege and expectation. He sang until cancer effected his voice box, yet he still found a way to make a joyful noise unto the Lord even if he could only hum or wave his hands. Deacon Smith, James and Coy...was a humble man who always had a smile to share, time to talk and to listen. He never met a stranger, but many strangers took to him over the years. He always strived to be a beacon of faith in the community and all who encountered him, whether family, friends and those unfamiliar. All found resolved and value in his company and his infectious spirit. Now he would readily admit he was not perfect, but he would be sure to let you know that he knows a Man who is a redeemer. With this faith and assurance, he lived with confidence and gratefulness.

Coy was also an avid sports fan. He played baseball for many years in the community and had unique stories to share about his and his teammates "greatness". His favorite teams were the North Carolina Tar Heels, the Dallas Cowboys and the LA Dodgers. His commitment to his teams was strong and he found joy in watching each compete as the seasons changes.

Send flowers to the service of James "Coy" McCoy Smith