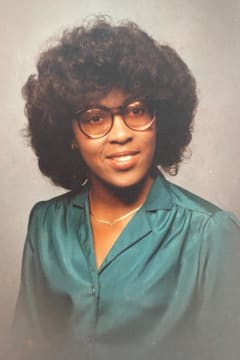 Early on Sunday morning January 9, 2022, our loving Heavenly father gently and peacefully called Stephanie home. Stephanie R. Spellman was born in Charlotte, North Carolina, January 28, 1958, to Mazelle Price Roberts and the late Royal N. Roberts. She was the oldest daughter. Stephanie was called by her family and friends, “Steph”.

She accepted the Lord Jesus Christ as her personal savior at an early age. She attended classes to become a member of St. John United Methodist Church and Sunday School. By living a short distance from church, she would regularly walk to church.

Stephanie attended Virginia Public Schools and Rockingham County Schools, graduate of John Motley Morehead High School, Class of 1976. She was accepted into the “Who’s Who Among American High School Students”, for students who have excelled in Academics, extracurricular activities and community service. She pursued her higher education at Saint Augustine’s University where she received her B A Degree in Art, Magna Cum Laude. She was a member, AKM Honor Society, Art Club and Omega Psi Phi, “Q-Pearl”. After graduation she met the love of her life and married Reynaldo Spellman, Sr., moving to Norfolk, VA; but that union did not last. As a career federal employee in the Hampton Roads Area, Stephanie worked in three Arts-related positions at the US Army’s Ft. Eustis in Newport, VA and at Langley Air Force Base in Hampton, VA. She eventually moved up to a position as an illustrator at one of the base Graphics Shops, Training and Audiovisual Support (TASC), where she worked on a range of military briefings, exhibits, videos and photographic assignments. Stephanie eventually moved to a similar position at Langley AFB, ASA Visual Information Specialist (Graphic Designer). She received numerous letters and comments of appreciation throughout her career.

From her previous union, she became the proud mother of a daughter and son. She is survived by her daughter, Renada L. Spellman and son, Reynaldo L. Spellman, Jr., three beautiful and intelligent grandchildren; Jaida, Ryan and Laila; three sisters; Marilyn T. Roberts and Rosalie N. Roberts, Greensboro, NC and Pamela Roberts -Price, Eden, NC, two aunts, one uncle, two nephews, one great niece, a host of cousins and friends.

Send flowers to the service of Stephanie Spellman

Honor the life of Stephanie Spellman