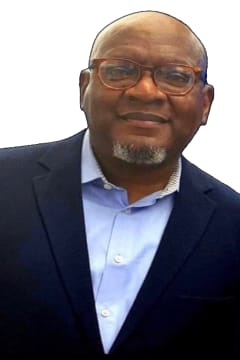 And he gave some, apostles; and some, prophets; and some, evangelists; and some, pastors, and teachers; For the perfecting of the saints, for the work of the ministry, for the edifying of the body of Christ. Ephesians 4:11-12 KJV

Before the dawn on Saturday, January 8, 2021, Apostle John N. Gatling grasped the hand of God and walked into glory. Before taking his final journey, John took pride on being a disciple for Christ, doting father, a sincere businessman, great friend, a mentor to many. John began his earthly journey on October 14, 1966, by becoming the oldest son to John Rufus and Gloria Welch Gatling in Norfolk, VA. There, he was raised as the oldest son with sister, Phoebe Gatling Woodcock, and brother, Mark D. Gatling.

During his time on earth, John had many accomplishments that ultimately made his family and friends proud. In 1991, John married Ramona Gatling Pelzer and from that union birthed his oldest son, Jonathan David Gatling.

John began his collegiate career at North Carolina A&T State University but chose to embark on an entrepreneurial endeavor. John and longtime friend, Miguel Wilson, began a custom clothier business, John Michael Menswear, in which John eventually became an independent owner and CEO. In 1994, John met Conrad Reaves and was introduced to salvation and Evangel Word Ministries. There, he studied under his Spiritual Father, Bishop Otis Lockett, Sr., whom he admired and revered. On New Year’s Eve, December 31, 1995, John preached his initial sermon, “When Your Trusts Kick In”. He received his Elder’s license the following year.

John’s love for sports, his sons and friends led him, along with close friends, John Reynolds, Rudy Clark Alan Hooker, and J. T. Tonkins, to begin the Giants Pop Warner Football Organization Board in 2010. This team comprised of local 336 dominating talent who went on to the Divisional Playoffs in their first year. Out of all his accomplishments, John will be remembered for his love for God, the Word and the Prophetic. With this passion, he started Charlotte Christian Center in 2002 and Apostolic Power Broadcast in 2020. During this time, John poured himself into teaching on the Prophetic and Five-Fold Ministry. Through his teachings, he felt the need to train believers nationally. This was done through his published books: The Prophet’s Epistle and The Watchman’s Prophet Handbook. While growing this ministry, he met Prophet Peter and Sheila Kwok, who will forever be dear and true friends in ministry and the family.

Send flowers to the service of Mr. John Gatling