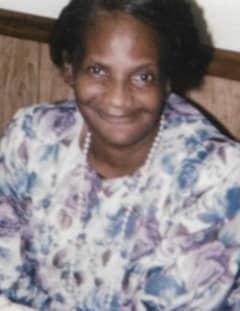 “WHOSOEVER LIVEITH AND BELIEVEITH IN ME SHALL NEVER DIE.”- John 11:26

Miss Isabelle Annette Howard was born on November 3, 1939 to the late Mr. & Mrs. Jeff Addison (Eva B. Wilson) Howard in Pascagoula, Mississippi. She transitioned from this life on September 25, 2019. At an early age, she was baptized as a member of First Missionary Baptist Church in Moss Point, Mississippi. She also served as a member of the FMBC Usher Board. Isabelle attend Magnolia Elementary and Magnolia High School as a member of the Mighty Monarch Class of 1958. Isabelle was a very generous and kindhearted aunt. She loved her nieces and nephews and beyond a fault, she was devoted to assuring that they all were showered with gifts, especially during the holidays. She was always there to assist her siblings with the care of their children and continuously offered a caring heart to her family when they needed her support. For many years, Isabelle was employed at the Cinderella Knitting Mill in Pascagoula, MS. Although she was a woman of limited financial means, she was determined to find a way to give to her nieces and nephews as well as her great-nieces and great nephews. To accomplish this, she became an avid recycler to supplement her income. Isabelle was a strong willed and determined woman. Upon falling ill, Isabelle lost her ability to speak. However, through her will and determination, she was able to communicate her disposition at any given time. Although she suffered in illness for several years, she was a fighter until the very end. Her parents and six of her siblings preceded her in death: Reverend Harry A. Howard, Sr., Harriet Nettles; Mac D. Howard; Maxine Howard; Edwin Howard and Edwina Howard. Isabelle will live on in the memory of: one sister, B. Janet (Jimmie) Cooper, Ellenwood, GA; her god-daughter, Natosha Brown; her sister-in-law, Mrs. Roberta Howard; her devoted nieces; Evelyn Nettles, Donna (George) Matthews, Sonia R. Hester (caregiver), Yvette Cooper, Francine (Darrell) Lane, Sharonda Howard, Karen (Bryan) Dawson, Raquel Howard Williams; her devoted nephews; Michael (Arie) Nettles, Larry Howard, Tony Howard, Mac (Marsha) Howard, II, Harry (LaTonya) Howard, Jr., She is also survived a host of great nieces and nephews: Rodney Maddox, Erin Howard, Jennifer Howard, Ana Nettles, Sabin Nettles, Aidan Nettles, Jade (Cresean) Hughes, Jillian (Norvel) Smith, Jarvis Hester, Mikos Witherspoon, Tony Howard, Jr., Myron Howard, Bradley Howard, Sydney Lane, Kendall Lane, Whitney Howard, Shardae Howard, and Tori Williams. There will be a viewing Wednesday, October 2, 2019 from 4-6 p.m. , at Robinson's Friendly Funeral Home Chapel 4301 Main St. , Moss Point, MS. 39563. Funeral services will be at 11 a.m., Thursday, October 3, 2019 at First Missionary Baptist Church, 4600 Main St. Moss Point, MS. 39563. Interment will be at First Missionary Baptist Church Cemetery.

Send flowers to the service of Miss Isabelle Howard