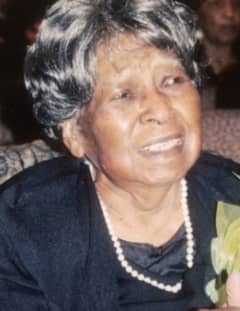 The Life of Mrs. Claribelle Howard Weaver Claribelle Howard Weaver was a devoted Christian, loving wife and mother, consummate musician, teacher, librarian, friend and soror. Mrs. Weaver, who was married to the late Alonzo Weaver, died peacefully on the afternoon of Saturday, August 3 at Methodist Hospice Residence at the age of 97. The oldest of three children, Mrs. Weaver was born in 1922 in Memphis to Simon and Magnolia Howard. Her sister, Emma H. Scott and brother, Simon L. Howard Jr. preceded her in death in 2013 and 2017 respectively. Of the many lessons Mrs. Weaver’s parents taught her, the most valuable one was the power of education. The desire for an education led Mrs. Weaver to LeMoyne College where she earned a Bachelor of Arts Degree. Also while at LeMoyne, she met the love of her life, Alonzo Weaver. After they graduated, they married in 1943. Mrs. Weaver served her community as an educator and librarian. She later taught in the Haiti, Missouri school system. In 1948 she taught at the Capleville and Brooks Ave. elementary schools in the Shelby County School system. After receiving her librarian certification from Tennessee A&I State University, Mrs. Weaver joined her husband as librarian at Mitchell Road, where Mr. Weaver was the high school’s principal. During her career, she also earned her Master’s degree in Library Science from Memphis State University in 1975. She served as librarian at South Side High School until her retirement in 1987. Based on her skills and tenacity to build and continually improve Mitchell Road’s library, the school’s alumni dedicated the library to Mrs. Weaver in 2016.

Alonzo and Claribelle Weaver were blessed with three children – Phoebe Weaver (Willie) Williams of Milwaukee, Wisconsin; Phyllis Weaver of Memphis; and Alonzo (Suzane) Weaver, both of Memphis. Through Phoebe’s marriage, Mrs. Weaver also is survived by her two beloved granddaughters, Angela M. (Erik) Ingenito of San Francisco, CA, and Mira N. Eaton of Milwaukee, Wisconsin; as well as Mrs. Weaver’s great-granddaughter, Aurora Mirabella Ingenito of San Francisco. In addition to her immediate family, Mrs. Weaver also leaves a host of beloved nieces, nephews, sorority sisters, and friends. Mrs. Weaver began her musical career at age 13 and found a wealth of comfort in the many hymns she played during her 75 years of serving as a church musician. As a member of Avery Chapel A.M.E. Church, she served as a church musician, an officer and as a member of the Missionary Society. While Mrs. Weaver loved those closest to her, she nurtured many persons beyond her immediate family. Mrs. Weaver’s passion was music and encouraging others to adopt reading and learning as a life-long avocation. Having dedicated a large part of her career to being a librarian, Mrs. Weaver, quite naturally, was an avid reader and often coached her students and others on the benefits of reading. In doing so, she created loving and lasting relationships with former students and friends. Her love for Alpha Kappa Alpha Sorority began with her initiation into LeMoyne College Beta Tau Chapter in 1940. After graduating, she joined the Beta Epsilon Omega Chapter, where she was the musician for the Georgia P. Quinn Ensemble for more than 60 years. Mrs. Weaver’s contributions to her sorority included working on several committees: Health, Scholarship, Founder’s Day, Music and the Summer Reading Program. During 2015, she became the first Diamond Soror for Beta Epsilon Omega – representing 75 years of membership and service. Mrs. Weaver nurtured and valued relationships throughout her lifetime. As a person of extraordinary accomplishments and talent, when asked about the source of her achievements, she always reminded others that God deserves the glory.

The family will receive friends for visitation on Thursday August 8, from 4 until 5:55 pm with the Ivy Beyond the Wall ceremony beginning at 6 pm at R. S. Lewis and Sons 2944 Walnut Grove Rd. Service of celebration will be Friday August 9, 12:30 pm at St. Andrew A.M.E. Church 867 S Parkway E. Burial will follow in The Historic Elmwood Cemetery. In Lieu of flowers the family has requested that donations be made to Avery Chapel A.M.E. Church 882 E Trigg Ave Memphis, TN 38106.

Send flowers to the service of Claribelle Howard Weaver