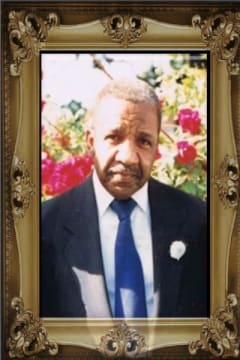 Eddie Rogers, the son of the late Bennie and the late Bessie Lackland Rogers, Sr., was born on September 4, 1935 in Memphis, Tennessee. On Monday morning, January 11, 2021, Providence granted Eddie what life could no longer give—health and wholeness. His body could no longer serve him, and in faith we affirm that God gave him eternal life. Brother Eddie’s rearing in a loving Christian family gave him the affirmation that he needed to aspire. His perseverance, self-improvement, and patience evolved as a young worker on his father’s farm in rural Shelby County. However, in the early fifties, the family moved to south Memphis. The change from farming agricultural products to marketing products offered greater opportunities for the family. Brother Eddie completed his elementary and junior high grades in Hickory Hill and Maple Avenue schools in Shelby County. Eddie excelled in his high school studies in the legendary Memphis City School System. Gifted mathematics students, Eddie and twin brother Freddie graduated from Hamilton High School in 1954. He accepted Christ as his personal Savior in 1948, and he joined the Hickory Hill Baptist Church pastored by the late Revered A. Y. Crutcher. In 1950, he united with the Old Nonconnah Missionary Baptist Church, pastored by the late Reverend J. C. Petties. At Old Nonconnah, Brother Rogers’ Christian life became full blown, and he formed lasting associations in his role as an usher and faithful Sunday School scholar and teacher. A great-grandson of one of the Church’s founding fathers, Freeman Lawson, Eddie was blessed to worship with his family in the beauty of Holiness. Joining his eldest brother, Hugh Eldridge Rogers, Brother Eddie began his employment tenure at Tension Envelope Company in Memphis, Tennessee. However, in pursuit of greater career opportunities, Eddie relocated to Ft. Wayne, Indiana. Surrounded by his cousins (The Grahams and the Wrights), Eddie quickly adjusted to his new environment. Additionally, Eddie resided less than 200 miles from his youngest brother, Bennie, Jr. in Chicago. He enjoyed numerous family dinners and other celebrations with Bennie and his dear family. He was a retiree of Concordia Theological Seminary in Ft. Wayne. In Ft. Wayne, Eddie united with the Progressive Baptist Church and continued to follow his early teachings of serving God and his fellow man. Again, he was an usher, fulfilling God’s Word: “I had rather be a doorkeeper in the house of my God than to dwell in the tents of wickedness.” (Psalm 84:10b KJV) “To every thing there is a season, and a time to every purpose under the heaven. “ (Ecclesiastes 3:1 KJV) During the fall of 2018, Eddie’s season to be with his siblings was apparent. He returned to Memphis to the delight of his brother and three sisters. Preceding him in death was his son, Benjamin; his father and mother; three brothers, Hugh Eldridge, Reverend Freddie (twin), and Bennie Rogers, Jr. Additionally, he was predeceased by his three nephews: Hugh Jr., Freddie, Jr., and Adrian Earl; and his niece, Vanessa Rogers Moore. Eddie will be missed greatly by his devoted brother, James Curtis Rogers; his three beloved sisters, Bertha Rogers Looney, Dorothy Rogers Upshaw, and Ora Rogers Head (Archester). Included also are his six caring nephews and his six loving nieces; sister-in-law, Mary Hall Rogers; great-nephews, great-nieces, numerous cousins and several friends. His memories will be cherished by his extended church families of Old Nonconnah; former classmates, former coworkers, and neighbors who feel a close relationship to our beloved BROTHER, UNCLE, AND COUSIN. An obituary of such a one as Eddie Rogers can only reflect a faint glow in writing thereof, but all who knew him will forever see its light. Such light cannot be darkened. It will glow forever.

Lovingly submitted by the Family

Send flowers to the service of Eddie Rogers

Honor the life of Eddie Rogers