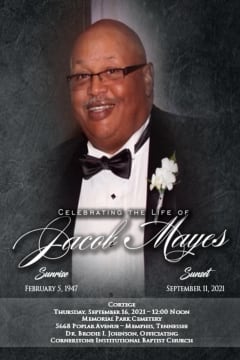 Jacob, better known as ”Jake”, was the third of four children of the late Charles and Elizabeth Mayes. Jake was born on February 5, 1947, in Jackson, Mississippi. He attended Brinkley High School and graduated in 1967. He received a BS degree from Tennessee State University and pledged Phi Beta Sigma. Jake joined Masonic Lodge J.A. Myers #349. He later earned a Master’s Degree from Chicago State University in Health and Physical Education.

Jake’s passion was football which allowed him to play in the NFL for the San Diego Chargers. As a hobby, he became an avid golfer.

Jake loved Physical Education and taught high school in the Chicago Public Schools until his retirement in 2007. During this timeframe, he furthered his education and received multiple certifications.

Jake moved to Memphis, Tennessee, where he continued his passion for golfing. While golfing almost daily, he acquired friends. Jake became the “entertainer” for all who had an opportunity to be in his presence. He enjoyed having monthly luncheons with his “boys”.

During Jake’s Christian journey, he united with Cornerstone Institutional Baptist Church in Memphis, Tennessee, under the leadership of Dr. Brodie I. Johnson. Jake was a faithful supporter of the church.

Jake united in holy matrimony to Delores Loretta “LoLo” Fisher and celebrated their union for forty-nine (49) years. They remained lovebirds until the end! Devotion, honor and respect were the main ingredients for their lifelong marriage. They realized that ultimate trust was the glue to their lasting partnership.

Send flowers to the service of Jacob Mayes

Honor the life of Jacob Mayes