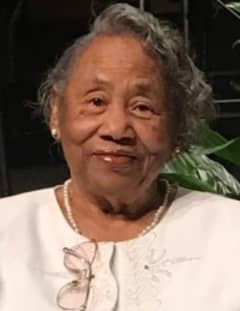 Florence Eaton Rogers born July 4, 1934 to the union of James Eaton (Son) and Celia Benjamin Eaton deceased. Jesus called and she answered on March 25, 2019 at a local hospital.

She graduated from Allen Institute in 1951 and received her degree from the Mobile Branch of Alabama State College in 1953 and Besteda Beauty School where she received her certificate as a licensed beautician. She was an astonished prominent beautician with a unique skill for a press and curl which looked like it was chemically relaxed, some would say, you couldn’t even shake the Shirley temple curls out. She was employed as a Custodial Engineer with the MCPSS at Griggs Elementary School and the University of South Alabama Campus where she retired after 30 years of service. She was baptized at Shiloh Missionary Baptist Church at an early age, where she remained to be a lifelong member until her death. She was very strong in her Christian faith and could always be heard saying, “I am blessed and I want complain.” She believed in the concept, It takes a whole village to raise a child.

Her remains will lie in state Friday March 29, 2019 at the Bell- Miller Memorial Chapel of Samuel Jackson Mortuary from 3pm until 6pm and Saturday March 30, 2019 @ New Shiloh Baptist Church of Mobile from 9am until the 11am Homegoing Celebration with Rev. Clinton Johnson, Sr, Pastor and officiating Minister. The Final Bed of Resting will follow in Lawnhaven memorial Gardens in Theodore, AL.

Send flowers to the service of Florence Eaton Rogers