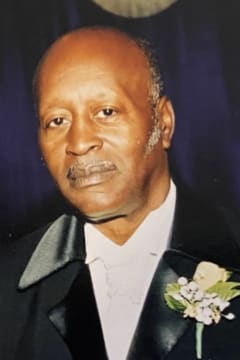 Perry Lewis II was born to the union of Smart and Charity Lewis on October 4, 1937 in Orrville (Dallas County) Alabama, and was a life-long resident of Mobile, Alabama.

Perry was a graduate of Central High School, Class of 1959, where he demonstrated his athletic ability in football. He wore jersey number “19” and was known as “Jetta.” He secured employment at Atlantic Marines Shipyard, formerly known as Addsco Alabama Dry Docks. There he broke racial barriers and became the first African American crane operator. He worked there for 33 years and retired in 1999.

Perry was a devoted Christian and faithful servant in the Kingdom of God. He obeyed the Gospel of Jesus Christ in May of 1983 at the Andrews Street Church of Christ under the servantship of James Cooper Sr. For Perry, no work in the Kingdom was insignificant! He served as one of Bro. Cooper’s driver, driving him to minister in Moss Point, Mississippi, until Bro. Cooper passed away. Perry went on to complete a certificate in Ministry & Gospel from the School of Religious Study under the instruction of Minister Lloyd Harris.

In 1988, Perry moved his membership to the Southside Church of Christ, under the servantship of Ulysses Johnson, Sr. For the past 33 years, he served faithfully at the Southside Church of Christ until God called him to rest. Perry's influence was not limited to the congregations of Mobile, Alabama. He traveled and impacted congregations in Flomaton, AL, Atmore, AL, and Pensacola, FL, known for his ability to lead singing, generosity in benevolence work, and strong but humble attitude of sticking with the Bible. His favorite scripture was John 3:16, “For God so loved the world, that he gave his only begotten Son, that whosoever believeth in him should not perish, but have everlasting life.” His favorite hymn was “It Is Well With My Soul.”

In 1964, Perry met the love of his life, Irma Jean Lewis (Wasp). When they first met, Perry courted Irma and affectionately referred to her as “Baldwin County.” She would become God’s gift to Perry and they married on September 18, 1965. For 56 years, Irma was a devoted wife, who Perry cherished. Even when his health declined, and his memory began to fail, he would call and motion for “Jean”—a committed wife that embodied the concern of Abigail, the wisdom of Esther, and the meekness of Ruth.

Perry was a skilled fisherman and because of his benevolent spirit, he would often share his catch with extended family, friends, and church members. He enjoyed sports, particularly baseball, basketball and football; and he often watched classic Western movies.

His remains will lie in state Saturday November 6, 2021 from Southside Church of Christ of Mobile, 10am until the 11am homegoing Celebration . Burial will follow in Gethsemane Cemetery. The Final and Most Sacred Arrangements is entrusted to the Elite ,Dignified staff of Samuel L. Jackson Mortuary, Ltd., 271 North Cody Road, Mobile, AL 36608.

Send flowers to the service of Mr. Perry Lewis II