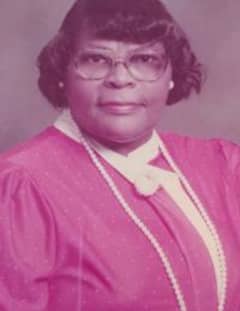 Today we celebrate the life of God’s gentle soul, Mrs. Willie Mae LaNade Tucker Kiser, affectionately adopted by many as “Mama.” Mrs. Willie Mae was born January 5, 1922 to Rev. Anthony Tucker and Carrye A. Thomas in Gosport, Alabama. Mrs. Willie Mae was the oldest of three daughters by this union. She was preceded in death by her parents; husband, Leon Kiser; her sisters, Lorna Tucker and Eunice Tucker; a half-brother, Samuel Tucker; and a half-sister, Mary Tucker Campbell.

Mrs. Willie Mae was always a teacher at heart. She followed in the footsteps of her mother and grandmother who were both educators. After graduating from Alabama State University for Negroes in 1954 with a Bachelor of Science degree in Education, she began her career as an educator. Over the span of her 20-year career, she was a teacher and mentor to countless students of all ages. She was very passionate about being an educator and every aspect of her life reflected her love for sharing her gifts with others.

Mrs. Willie Mae started her career as a teacher in the public schools of Clarke County in Alabama, most specifically, Mackey Branch school in Gosport, Alabama. She was also a Sunday School teacher and faithful member at her father’s church, Mackey Branch Baptist Church in Gosport, Alabama. Mrs. Willie Mae became a business owner when she started her own Pre-K school program in Mobile, Alabama. She concluded her teaching career in the Mobile County Public School System by retiring early in 1974 due to family obligations.

In her early life, Willie Mae was introduced to her heavenly Father and became a devout Christian while growing up in her father’s church, Mackey Branch Church in Gosport, Alabama. Willie Mae always credited her parents for instilling in her the principles of virtue and love for mankind. Though she was a “preacher's kid,” she often credited her father for teaching her the meaning of servitude and faith.

While serving as a faithful member at Mackey Branch Church, it was there at one of the church’s “Big Meetings” where she met the love of her life, Leon Kiser. Willie Mae and Leon were married at Mackey Branch Church on August 25, 1956. The couple moved to Mobile, Alabama where she assumed the role of loving step-mother to 4 young adults, the late: Robert Kiser, Leon Kiser Jr., Cleethel Kiser Mumford, and Marie Kiser Henry. But soon, Willie Mae and Leon began a family of their own, creating a family of six children, four boys and two girls. Willie Mae would continue to exercise her love for teaching over time, but ultimately retired from teaching devoting the rest of her life to Leon and raising their children.

After leaving her father’s church in Gosport, the couple soon found a new church home in Mobile at St. Peter Missionary Baptist church where the late Rev. G.L. King was the pastor. The couple were faithful members and spent years of servitude at St. Peter. After Leon’s passing in 1979, Willie Mae continued to serve on the Deaconess board, and remained a faithful member and supporter of St. Peter until such time she was unable to physically do so. Willie Mae LaNade Tucker Kiser gracefully and peacefully transitioned from this life on February 4, 2019, at 5:33 a.m. to join her husband and exchange her earthly body of 97 years for eternal life with her heavenly Father.

Her remains will lie in state Saturday February 9, 2019 from St. Peter Baptist Church 705 S. Bayou Street Mobile, Al from 9am until the 11am Life Celebration with Pastor Cleveland McFarland, Officiating Minister.

The Earthly Bed of Rest will follow in Lawnhaven Memorial Gardens.

Send flowers to the service of Willie Mae Kiser