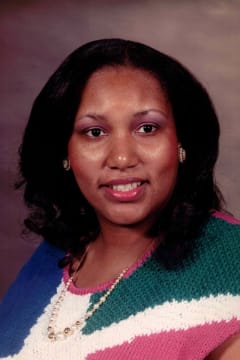 Valerie "Judy" Henderson departed this earthly realm, late in the evening on February 15, 2022 in Jackson Mississippi. She was 67 years old and a servant of God. Valerie was the 5th of 7 children born to Eugene II and Clara Henderson in Meridian Mississippi. She was given the nickname, Judy, by her Big Daddy, Washington “Wash” Wilson.

Valerie attended West End Elementary, George Washington Carver Junior High, Kate Griffin Junior High, Meridian High - T. J. Harris Campus and Meridian High schools. Valerie's father shared his love of music with her at an early age. For 7th grade band at Carver, he bought her a new, sterling silver saxophone with pearl buttons. She played that saxophone from Carver all the way through high school. Valerie graduated from Meridian High School in 1972 where she was a member of the Wildcat Marching Band and Instrumental Music Club. Valerie was also a member of the Hostess Club, in which a select group of female seniors would serve as hostesses during community events. Valerie kept in touch with a lot of her childhood, neighborhood and school friends. She made an effort to actively participate in reunion activities organized by her high school buddies.

Upon graduation from high school, Valerie matriculated to Ole Miss. In 1976, she received her Bachelor of Arts in Education and in 1977 she received a Masters in Library Science from the University of Mississippi in Oxford. She loved her Alma Mater and kept in touch with several of her college friends.

She returned to Meridian to start her professional career as a Librarian and Media Specialist. She was the head Librarian at Poplar Springs Elementary School from 1978 to 1982. She was also a Librarian at Meridian Junior College during this time frame. Valerie was then recruited by Hinds County Public Schools and relocated to Jackson. She worked at Byram High School and Edwards Attendance Center. In addition to her normal duties, she was the Advisor for the Library Club and the Media Center Pageant, a Sponsor for the Yearbook and assisted the Newspaper Staff. From 1988 to 1992, she was the Librarian and Media Specialist at Lake Elementary for Jackson Public Schools (JPS). In August of 1992, she continued her career with JPS and began working at Siwell Road Middle School. She would work there as the Librarian and Media Specialist until her retirement in 2017. While at Siwell, she was the Sponsor for the Reading Fairs, Book Fairs, Paw Print Reading Club and Spelling Bee. She served as PTA Treasurer and was on various committees. One of which was the Courtesy Committee that welcomed new teachers to Siwell, amongst other duties. Over the years she mentored many of her Library Student Assistants. She adored her Library Student Assistants and the feeling was mutual. She worked tirelessly to encourage and inspire the Siwell students over those 25 years and kept in touch with many.

Valerie’s professional memberships included the American Library Association, the American Association of School Librarians, the National Association of Negro Business and Professional Women’s Club and the University of Mississippi at Ole Miss National Alumni Association. Her honors included a 1986 Outstanding Young Women of America award, which recognized her outstanding abilities, accomplishments and service to the community and she also received other numerous certificates of appreciation. Over the years, Valerie found time to volunteer as an Election Poll Worker.

For Collins Funeral Home, Valerie was a Staff Member and Insurance Agent for 40 plus years. She made a personal connection with each of her policy holders. Some called her Valerie. Some called her Judy. Some even considered her family. Often times, she served as the insurance agent for multiple generations within a family. She would drive to various cities in the Jackson metroplex to collect premiums. Her policy holders were her priority and she would adjust her vacation time, to ensure her policy holders needs were met and that they were serviced in a timely manner.

Organizational and people skills made her the perfect person to serve in a leadership position for her Home Owners' Association (HOA). She served as Treasurer of the Crossing of Autumn Woods Property Owners' Association (CPOA) for over 30 years. She devoted her time to ensuring the CPOA bylaws and regulations were followed. She led the Welcoming Committee for new residents. Over the years, she served as committee lead for multiple CPOA projects and actively participated their social events. She became long time, personal friends with many of the residents.

Judy was reared by her parents to be great and was expected to excel in her endeavors. Even though she was the 5th child, she set the example of what a big sister should be. It was that same model of excellence that she expected of her siblings, nephews and even students. She selflessly helped her siblings and others that needed it. She was a no-nonsense person. She gave it to you straight, no chaser. She had a reputation of being bossy and she wore that jacket proudly.

It was through her Big Momma, Carrie Wilson, she would begin her journey, as a child, with the United Methodist Church. It was this spiritual connection that would carry her for the rest of her days. She was baptized St. Paul United Methodist Church in Meridian under Reverend Barnett. After graduating college and returning to start her career in Meridian, she continued that membership at St. Paul under Rev. E. L. Henry, where she served as a choir member. Upon relocating to Jackson, she transferred her membership to Central United Methodist Church and was a choir member for over 33 years. In 2015, Valerie began attending Wells United Methodist Church's morning services under Rev. D. Keith Tonkel. She later transferred her membership and joined the Wells Choir. Her devotion to Wells Church continued with the start of live streamed and virtual services, where she gleefully sang with Wells' virtual choir under Rev. Chris Cumbest.

Her life will be remembered by her siblings Candy Henderson-Eboh and Yvonne “Tiny” Henderson Fenner, both of Grand Prairie, TX; Jaqueline “Jackie” Henderson of Madison, MS; Eugene “Butch” Henderson III of Humble, TX and Taletha Henderson Gaston of Jackson, MS; her nephew/son Chris Henderson of Cerritos, CA and a host of nephews, nieces, cousins and childhood friends. Additionally, left to cherish her memory include her CPOA neighbors, Collins Funeral Home family, a countless number of students, relatives, Collins Insurance Policy Holders, friends and many others whose lives she impacted.

Valerie “Judy” Henderson's earthly presence will definitely be missed by many, but not forgotten.

Send flowers to the service of Valerie Henderson

Honor the life of Valerie Henderson