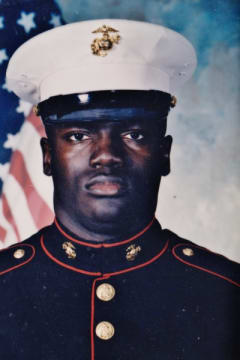 The the late Mr. Arthell Brown III departed this life on Saturday, April 25, 2020. A private ceremony for the family will be held on Saturday, May 2, 2020 at 3:00 p.m. from the New Mt. Pleasant Baptist Church Cemetery in Coverdale, Georgia. Words of Comfort will be given by Pastor Jerry Braswell.

Arthell attended schools in the Worth County Public School System. He was a 1997 graduate of Worth County High School and furthered his education at Valdosta State University with a major in Criminal Justice and minor in Anthropology.

While attending VSU, he fell in love with his wife, KiKidee, and the two became one on December 12, 2011 and to this union were born two children.

Arthell proudly served his country in the United States Marine Corps and retired after 21 years of service. He worked at the Marine Corps Logistics Base in Albany, Georgia.

Arthell gave his life to Christ at an early age and joined New Mount Pleasant Baptist Church. Arthell had an avid love for all sports, but was by far a football jock. He participated in basketball, football and track and field while attending Worth County High School. He then went on to play for the Valdosta State University blazers Football team. He played Defensive Back, and won a few GSC Championships. Those that knew him well dared not to speak against the Florida State Seminoles and the New England Patriots. MJ, Kobe and if Lebrina was the man!

On Saturday, April 25, 2020, after touching the hearts of many Arthell transitioned from this life and gained his heavenly wings. Many were saddened by his passing but joyful in knowing that he knew the Lord and the sacrifice Jesus Christ made for his life. He was preceded in death by grandparents Mr. Arthell Brown Sr., Mary Lee Brown, Mr. Will & Rosa Hall, Jimmy Brown, Uncle James Hall and Ethel Mae Lawson.

Send flowers to the service of Arthell Brown III