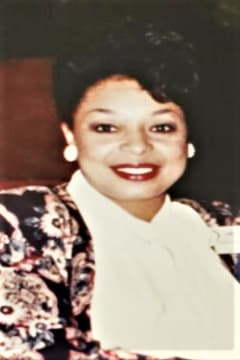 At the request of the family, the remains have been cremated. A Memorial Service will be held on Friday, June 10, 2022 at 11:00 a.m. from the First African Baptist Church in Sylvester, Georgia, with the Reverend Lindsey P. Napier, Sr., Presiding, and the Reverend Dr. Clifford Porter, delivering the Eulogy. Services may be viewed Facebook Live from the "Shipps Funeral Home" Facebook page or by clicking the Video Stream link on this site's Home Page.

Mrs. Precious O’June Jackson Richey was born March 8, 1958 in Sylvester, Georgia to the late Mrs. Willie Mae Greer and the late Mr. Robert Nether. June was raised to love God and to be a smart and self-assured girl who could hold her own in any setting. Her Aunt Precious and Uncle Henry also played a major role in raising her. From her namesake Aunt Precious, June developed a love of cooking and baking and from Uncle Henry, she loved and cared for animals.

As a young girl, June joined Brown Chapel CME Church, in Sylvester, Georgia, where she professed her faith and belief in Jesus the Christ as her Resurrected Savior. She sang in the choir and always participated in church programs. She passionately engaged and led Sunday School discussions. In fact, the seeds of her excellent oratory skills were planted and nurtured at Brown Chapel CME Church.

June worked hard throughout her school years earning good grades, numerous accolades, scholarships and awards. She moved effortlessly from the basketball team, to the cheerleading squad to Homecoming Queen by the time she graduated from Worth County High School, in 1976. June’s first year of college was at Valdosta State University. She returned to Sylvester where she dated and married her longtime friend-turned husband, Nathaniel Richey, in 1979. Their first child passed away in 1980. After the heartbreaking loss, June and Nathaniel delightfully welcomed their son, Rashad, in May 1981.

As young civil rights activists, June and Nathaniel were known for passionately speaking out against acts of racial discrimination in schools, communities and the criminal justice system. With a passion for helping people, June found employment that matched her passion for activism that honed her knowledge and skills as a leader. June worked for the prominent civil rights leader and attorney the late Chevene Bowers King, known as C. B. King, for several years. Determined to finish her undergraduate studies, June enrolled at Albany State University. Always the academic perfectionist, she settled for nothing less than what she believed she had earned and deserved. Once June received a grade of 100 on a test where the maximum points were 104, classmates weren’t surprised when June adamantly debated the facts of the questions and answers because she wasn’t leaving 4 points on the table. Needless to say, after presenting the facts, she received the 4 points not only for herself but the rest of the class who had the same answers. June graduated from Albany State University with a B.S. Degree in Business Management. She also earned a Master’s Degree in Organizational Leadership from Troy University and enrolled in Albany State University in June, 2020, to work on her second Master’s Degree. June only wanted the very best–academically and professionally. June was known for perfectly coiffed hair and makeup, coupled with sharp suits and dress pumps. She wouldn’t even go to the mailbox without making sure she looked her best. “You never know who you might meet,” she would unapologetically defend her decision to always dress impeccably. Her confident stride, beautiful smile and kind spirit brightened and commanded any room. It was her intelligence and with that drew people close and a magnetic energy that kept them even closer. All her characteristics emerged in childhood and flourished throughout her life in service to others. June was small in stature, but her personality was larger than life. She never hesitated to switch out of her chic attire and slip into a t-shirt, jeans and sneakers to help serve others. She routinely sacrificed her own needs to ensure that her family, friends and even strangers could experience a better quality of life.

In 1990, as one of the original field representatives in the Constituent Services Office for Congressman Sanford D. Bishop, June was known for providing professional service to the constituents in the districts, rushing home after work to change into casual attire, then rushing back out the door to help those in need. This was particularly true after devastating floods left countless Albany families desperate for food and shelter. Despite losing her own home in the 500-year flood, June overlooked her own problems to help find solutions for constituents struggling to get back on their feet. In these crises and in many other situations, June would often set aside her own needs to help those trying to overcome life’s challenges. June was the consummate professional and always wanted people to receive the best service, when the Congressman couldn’t attend certain civic and community events. Congressman Bishop knew he could count on June to stand in his place with class and grace. June would say, “While the Congressman couldn’t be here today, like a Hallmark card, he cared enough to send the very best.” That line always garnered a hearty laugh and helped reinforce the Congressman’s and the community’s trust in June's ability to lead and serve. She always knew what to say and how to say it–whether gently or more directly.

June’s ability to quickly assemble the right people and resources to help and provide for needs of the community. June used the same skills to serve in her roles at Phoebe Putney Hospital and the regional division of the Georgia Department of Labor. She also worked as the Executive Director of the Coalition for Diversity in Albany. Through a series of her own life experiences, June discovered having a heart for God’s people was a rewarding journey. She kept that bright smile on her face through it all. Her heart for God showed in how she served and loved people.

Her beloved son, Dr. Rashad Richey, continues to carry on June’s legacy of leadership, service and commitment to transform lives for the best. June was incredibly proud of Rashad and his accomplishments as a successful university professor, broadcaster, and entrepreneur. Rashad will always remember the love, sacrifices and laughs they shared and will never forget the lessons she passed along in dignity, class and respect.

June passed away May 25, 2022 with a love for her family and friends that was only surpassed by her love for God. Her daughter Aneesha Sabreen Richey, mother Willie Mae Greer, father Robert Nether, aunt and uncle, Precious and Henry Jackson, have all preceded her in death.

Send flowers to the service of Precious OJune "June" Richey