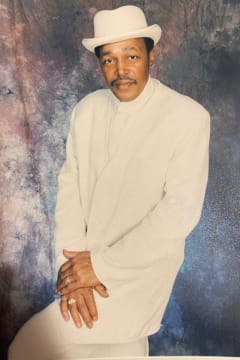 Mr. Paul Eugene Jackson past November 25, 2021. Memorial Service Saturday December 11,2021 at 2:30 pm in our Chapel 3041 Campbellton Rd. SW., Atlanta , Ga. 30311. Service will be Livestream (scroll to end of his obituary and select Memorial Service link). All participants must wear a mask while our Chapel seats 400 which allows for social distancing. In lieu of flowers, please send contributions to American Cancer Society.

On April 17, 1960, at 4:54 a.m., a bright eye, Grady baby joined his older brother Kenneth as the new son of Paul and Minnie Lee Troutman Jackson. Soon, the brothers were joined by a third brother, Christopher. The brothers grew well as they played, fought, and loved each other. Years later, they protectively greeted their baby sister, Paula Kenkristy, named for all three of them. Paul, early on demonstrated musical abilities which he used at school at Continental Colony Elementary and D. M. Therrell High School. Paul played violin in the string orchestra and trumpet in the marching band. He also had a beautiful tenor voice and wrote songs. Paul grew in a family with strong Christian values. His mother, Minnie believed in the mandate to train up a child in the way that he should go. Minnie made sure they were in Church. In fact, the rule of the home was “as long as you are in my house, you will go to church!” The family were active members of Central United Methodist Church. Later in life, Paul connected with Jesus House of Prayer where he was working to become a Deacon. Paul was active in ROTC in high school and upon graduation from Therrell he enlisted in the U.S. Air Force where he served as an Law Enforcement Specialist for five years and six months. While stationed in New Jersey, he met and married Mary Kay Whitaker. From this union, one son, Paul Eugene Jackson, II was born. Upon returning to Atlanta in 1984, Paul worked dutifully and became a certified forklift operator. He returned to school and graduated from Atlanta Technical College on May 16, 2016 as a Technical Certificate in Heating and Air Conditioning Installation Technician. He continued studies at Georgia Piedmont Technical College (formerly Dekalb Technical College) and Interactive College of Technology for advanced training in HVAC/R. An introspective young man who enjoyed singing old Rhythm and Blues songs, especially Peabo Bryson, he could also “cut the rug” as a dancer. He loved his family and was known as the family historian who could remember all significant family events, dates and details and might even remember what you wore! The family will cherish and remember him in their hearts and willingly shared aspects of who he will always be to them: Brother Kenneth: Paul could throw down on a grill. He was a great chef. Brother Chris: “I looked up to him for his work ethic.” Sister Paula: “I could always count on my Big Brother to be my protector, Guidance Counselor, teacher and my guardian angel.” Nephew Jacoby: “He was a fighter and could be bluntly honest with you.” Mother Minnie: “He was uniquely himself and he did life his way”. Paul will be missed and is survived by his Mother Minnie Clark, his son, brothers and sister, nieces, nephews, and other family members, co-workers, and friends.

Send flowers to the service of Paul Jackson

Honor the life of Paul Jackson