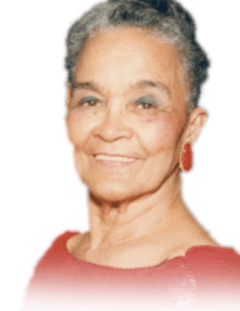 Vivian was soft and powerful, practical and spiritual, in her very essence she was a gift to the world.” ~ Cousin Pauline Mansfield

VIVIAN EMMA SCOTT will forever be remembered as sweet. Her quiet strength was a comfort and a beacon to all who knew her. Born February 8th 1920, to Asbury Edie Scott and wife Annie Louise Scott, she was raised on the family farm in Neeses, South Carolina along with sisters, Willie Mae, Isabell, Annette and Dorothy. Vivian and her sisters would grow to know and love their four older siblings from their fathers’ first marriage. The beautiful “Scott girls” as they were known, would all become educators but not before Vivian was crowned homecoming Queen at Claflin College where she joined Zeta Phi Beta Sorority.

With her degree in hand, seeking a teaching opportunity, Vivian journeyed to Philadelphia to live with older brother Jesse and spend time with her other older siblings. But the outbreak of WW II put an abrupt halt to her plans. It wasn’t long before duty called and she became a now famed Rosie the Riveter, helping build urgently needed ships for the war. With her earnings, she and her sister Isabell proudly brought their parents a home in Orangeburg, South Carolina.

Always courageous and adventurous, after the war, Vivian traveled to Los Angeles to marry the love of her life, Philip Govan Middleton, a local carpenter. Philip would later proudly boast, “The smartest thing Iever did was to ask Vivian to marry me.” To this day, he still marvels at the courage and spunk Vivian processed to board a train alone and travel across the country to Los Angeles, against the protests of family, concerned for her safety. On August 20, 1947 Phillip and Vivian would become the first couple to be married by Reverend L.L. White at the newly founded Holman Methodist Church in Los Angeles, their spiritual home. Their marriage would span 72 years. And together their indelible bond triumphed over life’s many challenges.

On July 2nd of 1948, the couple welcomed their first-born Phyllis into the world, followed by Dorothy sixteen months later, then Myron in 1953. Now a wife and mother, the deep yearning to teach still passionately churned inside Vivian. In an unexpected turn of fate, she would land her first teaching job at the Deuel Vocational Institute, a male juvenile correctional institution in Tracy California, more than 300 miles from the family’s home. The distance meant Vivian would be away from her young family for weeks at a time.

Teaching was Vivian’s gift. She was both stern and loving. In time, she landed a job as a 5th grade teacher in Los Angeles where she blossomed, working both tirelessly and joyfully for more than 25 years. As a mentor and friend to young teachers, she would often say “Have friendships in varying age groups and never stop working. Retirement is not what it is made out to be.” As devoted as she was to her career, nothing was more important to Vivian than family. She instilled in her children her lifelong values of a love of God; the importance of education; a sense of worldly adventure and always kindness to others.

As a founding member of the South Los Angeles Chapter of Jack and Jill, she introduced her children to an array of activities, from skiing to bowling. But her favorite extra-curricular activity was Bridge. She was known to host Bridge parties in every city where she resided. Her family all have their favorite cherished memory of her. Nephew Daryl Mitchell remembers “Aunt Vivian was fun, passionate and incredibly stylish. I remember the time the family traveled from California in the Thunderbird. Aunt Vivian jumped out in her miniskirt and Go Go boots like she just came off American Bandstand. She made any place she was feel warm and inviting.”

After teaching for over 25 years she retired, and joined her husband in Colorado Springs working with Myron and Dorothy in the Middleton construction business. Vivian stepped back into her teaching role as grandmother extraordinaire to her six grandchildren, helping with homework and after school activities.As the family traveled to London, Kenya, Zimbabwe, and South Africa the homework travelled and the lessons continued.

When Philip and Vivian moved to Atlanta in 1994, their grandchildren remained equally devoted.

Grandson Nye rallied to her side as her health faltered and she lost her eyesight. In what can only be considered a family circle of love, children Phyllis and Myron both uprooted their lives, moving to Atlanta to care for their aging parents.

Philip and Vivian remained faithful members of Cascade United Methodist Church, an enduring source of strength for them both.

Send flowers to the service of Vivian Scott Middleton