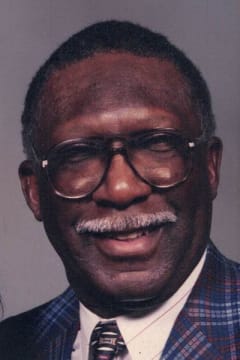 Deacon Joseph Roosevelt Glenn was born on July 8, 1932, in Calhoun County, Georgia to Fletcher and Susie Glenn. At an early age, he moved to Largo, Florida, and attended Williams and Curtis Elementary Schools. Deacon Glenn was a graduate of Pinellas High School, Class of 1951. In 1953, he joined the United States Army and after completion of basic training, he served in Germany and was discharged in 1956. After serving time in the Army, he joined the United States Air Force. Upon completion of the Air Force’s basic training, he was sent to Casablanca, North Africa, where he served for 22 months. Upon his return to the United States, he was stationed at Vandenberg Air Force Base in California. After his discharge from the Air Force, he moved to Los Angeles, California, where he became employed with the Wadsworth Veterans Administration Hospital. In June of 1962, he married Annie Pearl Mobley, who predeceased him, and they made their home in Los Angeles. He retired in 1983 and returned to Clearwater, Florida. During his early years, Deacon Glenn attended Mount Olive Missionary Baptist Church, South Clearwater, where his father was the Pastor. While residing in Los Angeles, he and his wife became members of Messiah Baptist Church where Reverend Whalen Jones was Pastor. He served faithfully on the Trustee Board and Finance Committee. When he returned to Florida, he joined St. John Primitive Baptist Church, under the leadership of Elder Benjamin Adams, Jr. and was ordained a Deacon, where he served as Chairman for two years. Deacon Joseph R. Glenn departed this earthly life on December 3, 2020. He leaves to cherish his memories…  His brother: Fletcher Glenn, Jr. (Clara) of Rochester, NY;  Godson: Andrew Bush;  Goddaughter: Angel Addison;  Sister-in-law: Kellis Glenn;  Caregivers: John and Martha Mitchell;  Several nieces, nephews, cousins, other relatives and friends. Graveside Services Saturday, December 12, 2020 11:00 AM with Visitation today Dec.11,2020 6-8 PM at St. John Primitive Baptist Church 1002 Palmetto Street, Clearwater.

Send flowers to the service of Joseph R. Glenn