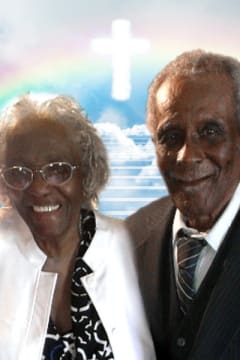 William James Gloster was born July 23, 1923, to the late Henry and Ollie Gloster - the youngest child and only son - in Gadsen, Thomas County, GA. He attended Thomas County Public Schools; then during his youth, he moved with his parents to Quitman, Brooks County, Georgia. He knew that there is life beyond this earthly existence and accepted our Lord and Savior, Jesus Christ, into his life at a young age at Bethel African Methodist Episcopal Church.

For many years, William worked for Brooks County Road Department in Quitman, GA. He took great pride in the many roads he helped build throughout the local area, sharing with loved ones “See that road? I helped build that!” and stressed that he helped build the road to his last earthly residence, Presbyterian Home of Quitman, GA. He was also a well established entrepreneur, owning a local community convenience store, food establishment, real estate, landscaping, transportation and demolition businesses well into his latter years. Upon his retirement from the Brooks County Road Department in 1988, he indulged in his favorite past time – farming, where he raised cattle and crops, providing food for his household and his local community. Wherever there was a need, Mr. William would do more than his part to help.

As a young adult, William caught a glimpse of a beautiful, sassy, spicy young lady, whom he pursued and captured her heart: the love of his life, Jeanette Davis, and they were joined in matrimony on January 2, 1960 in Quitman, GA. Theirs was a love of a lifetime, lasting some 61 years. To this union, no children were physically manifested, but God blessed them to receive and raise a beautiful daughter, Antoinette LaShon "Shawn" Taylor, their blessing from God. Mr. William was soft spoken, kind-hearted, very giving, mellow and knowledgeable wise historian who never met a stranger. His love of his family, his church, his farm, his lotto tickets and scratch off cards were preceded only by his love for God.

“I have fought the good fight, I have finished my course, I have kept the faith: Henceforth there is laid up for me a crown of righteousness, which the Lord, the righteous judge, shall give me that day: and not to me only, but unto all them also that love his appearing.” (2 Timothy 4:7-8)

Jeanette Davis Gloster was born January 15, 1926 to the late Jimmie Jenkins and Kathrine Davis in Quitman, GA. She was raised by Mrs. Ethel Davis and educated in the Brooks County Public School System, and received Christ at a young age at Beulah Missionary Baptist Church, Quitman, GA, where she remained a lifelong member.

Mrs. Jeanette worked for more than forty years at Quitman Laundry, starting as a young teenager, rising in ranks from a presser to a manager. Upon her retirement, she devoted her time to childcare for numerous children, particularly young single mothers, and assisting her husband in their family businesses.

An eye-catching beauty with style and flair, Jeanette caught the attention of a young, debonair William James Gloster, who became the love of her life. They were joined in matrimony on January 2, 1960, and recently celebrated 61 years of marital bliss. Though she was unable to bear children, she received what she called her blessing from God, a beautiful daughter, Antoinette LaShon "Shawn" Taylor, whom she raised and adored. She also shared a very special bond with her beloved son-in-love, Stacy Linder, Sr., who nicknamed her "Jenny Mae" which became her nickname by many family and friends.

Jeanette was a firecracker with a heart of gold. She was always full of joy and love for others. She was very outspoken, yet always willing to help others. Mrs. Jeanette was filled with much knowledge and wisdom, and she never hesitated to enlighten the lives of others. As the neighborhood parental figure, Mrs. Jeanette "did not play"; she was a loving but strict disciplinarian who would whip your butt, but give you her last. She was the "other Mother" to all the neighborhood children. Jeanette was also fearless - unafraid of anyone or anything, and would defend her loved ones at any cost. In her latter days, she was known as the resident comedian who was quick to assess and read any situation. And to the very end, she still loved to "shake, rattle, and roll", saying "shake it but don't break it!" She kept her family and caregivers well entertained. She was an Angel to our family and our community.

A celebration of life for Mr. & Mrs. Gloster will be Saturday, January 16, 2021 at 11AM on the lawn of Bethel A.M.E. Church. Visitation will be Friday at the Stevens-McGhee Chapel from 3PM-7PM. Visit this website or our Stevens-McGhee Funeral Home Facebook Page to view a livestream of the celebration for this beautiful couple who were blessed to transcend from labor to reward together. Continue to keep the Gloster Family and the Brooks County community in your daily thoughts and prayers.

Send flowers to the service of William & Jeanette Gloster