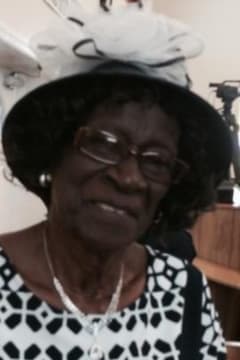 Deotha Felton was born on May 22, 1927, to James and Essie Marshall and resided in Eastman, Georgia with her three siblings. A few years later, they moved to Ocilla, Georgia where she grew up and completed the 11th grade. On May 24, 1944, Deotha was united in Holy Matrimony to the love of her life, Hilman Felton. In 1946, she gave birth to her first born, a bouncing baby girl, Mary Ann. To that union, three more children were added, Lorraine, Danny and Delphine during their stay in Ocilla, Georgia. Hilman wanted the best for his family; so, he enlisted in the Navy and was later station to the Naval Base in Ft. Pierce, FL. Once settled, Hilman, affectionally known as “Doc,” relocated his wife and their four children to Ft. Pierce, FL. While there, the family continued to grow. In fact, she gave birth to four more children: June, Herman, Brenda and Dorthea. Then in 1965, the course of her life would be forever changed; at the age of 38, she became a widower and was tasked with raising her eight children alone. She took her responsibility serious. As a matter of fact, she was viewed as a drill sergeant by her children; her home became a military based. They were given real chores and responsibilities; teamwork was expected and modeled through her explicit instruction and examples. Deotha knew the power of Proverbs 22:6, train up a child in the way he should go… She also knew the value of education, integrity and hard work. Knowing this, fueled her determination to engrain these core values in her children because she wanted them to be self-sufficient and independent.

Proverbs 22:6 – Train up a child in the way he should go: and when he is old, he will not depart from it. Moma “Dee,” lived by this scripture.

Raising her family alone drew her closer to God. She made it her mission in life to instill strong christian values in her children through attending church regularly and involving them in every church activity available to youth. Deotha was preceded in death by her loving husband: Hilman “Doc” Felton; parents: James and Essie Marshall, sister Ardelia Emerson, and brother John Henry Marshall.

Although many venues have opened and the restrictions of COVID-19 have been relaxed, we at Stone Brothers Funeral Homes are still enforcing the guidelines set forth by the CDC and FDOH to protect our families and our staff. We ask that you respect this, as it could very well save your life. We also ask that you acknowledge and execute the 6 feet social distancing guidelines as well.

Send flowers to the service of Deotha Marshall Felton