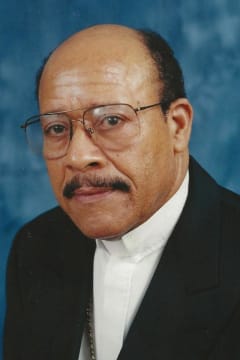 Reverend Robert Lewis Reynolds was born to the proud parent, Tom and Emmaline Reynolds. Robert was born at Saint Lucie Memorial Hospital on October 16, 1937. He was the eighth child in the birth line of children.

Robert grew up an articulate, inquisitive, adventurous, and likeable young man by all of his neighbors. As a child, Robert was educated in the Saint Lucie Public School System and was an excellent student averaging an “A” grade point average from first through eleventh grade. Then, which was a pivotable moment in his life, Robert told his parents that he was not going back to school in September to finish his senior year of high school. His parents informed him that he would either finish school or get a job. In August of that same year, he enlisted in the Navy.

Robert served at the US Naval Receiving Station in Norfolk, Virginia for four years. During these formative years, Robert had the opportunity to travel the world and open his mind to the abundance and possibilities of the world. Given his earlier childhood love for education, he realized how important an education would be for his life. He obtained his GED and was encouraged to take college courses while in the Navy. After serving his country for four years and receiving many commendations and a good conduct medal, Robert decided not to extend his stay and was discharged with a character of honor record.

Upon returning to Fort Pierce, Florida, he was again met with the challenges he left behind before the Navy. He had no money, and to get money for college, he needed a job. That lead Robert to secure a job as a delivery driver for Butterfield’s Pharmacy delivering medications. To continue improving himself, he attended junior college in Fort Pierce while working at the pharmacy. After two years of successful employment at Butterfield’s, Mr. Butterfield offered Robert a business proposal, which entailed, that he could work for the pharmacy on the holidays and summer while in college and he would help finance his education at Florida A & M University.

That following summer during recess, Robert made his most important decisions. He met a young college student working in the “soda shop” a block from his home. The young lady was Irma Taylor and after a traditional courtship, they married after they both obtained their college degrees.

Robert enrolled in the University of Oklahoma to attend an 18-month study in youth counseling. These studies and workshops shaped an excellent communication skill and an exceptional ability to work with people. In fact, these skills were noticed by others as he was recommended to the State of Florida to be hired in their Youth and Young Members Counseling Program. Robert and Irma moved to Jacksonville, Florida where Robert worked as a counselor for three years. The years working in Jacksonville changed him. Robert wanted and expected more out of life than just a job. It was also a time in his life that they were blessed with a beautiful son, Ronald Lamont Reynolds.

Robert renewed his love for service, church, and God. The family joined St. Paul AME Church in Jacksonville, Florida where the pastor was the former pastor of Mt. Zion Church in Fort Pierce, FL and a mentor of Robert. The pastor put Robert on the Steward Board and Irma on the Stewardess Board. Robert continued their work and studies in spiritual, leadership, and Christian growth. Robert enjoyed his religious role as a leader, mentor, and church advisor.

God blessed Robert with another formative career opportunity; this time for a management role in Xerox, although it came with the decision to move to Rochester, New York. This role allowed Robert to make a comfortable living, but the initial two years in Rochester left Robert yearning for a deeper spiritual connection. Robert could not find a church that satisfied his maturing spiritual needs and a call to work within the church. After a while, Robert’s mother told him about a family in Fort Pierce who had a daughter in Rochester who pastored a church. Robert visited the church and fellowshipped with an amazing group of God-fearing members within the Baber AME Church in Rochester, New York. At one of her evening services, God must have sent three angels to save him, because it was here where he met Joe and Celestine Thomas and Alberta Bullock. They were so devoted and loving in their service to God and the church that their commitment was additive.

After only one or two visits, without hesitation, Robert joined Baber AME Church. Shortly following him joining, Reverend Dixon became the new pastor at Baber and their paths seem to have been blessed by God. Rev. Dixon emersed Robert in learning the order of service, music ministry, closing and commissioning service. Robert was also asked to comprehend the doctrine and disciplines of the AME Church. Rev. Dixon’s mentorship of Robert pushed him to put his learning into action within various church roles and made sure his activities were all aligned to prepare for what would become his calling. This immense process meant that Robert took an active role at Baber AME Church as an Adult Sunday School Teacher, running midweek bible school, and working ministry on the Steward and Trustee Boards.

This emersion continued under the tutelage of Rev. Dixon and Robert completed his Master’s Degree in Theology within the Department of Religion at Colgate University in Hamilton, NY and Northeastern Seminary at Roberts Wesleyan College in Rochester, New York. This partnership, ordained by God between he and Rev. Dixon, lead to Robert receiving his first commission as a pastor. Robert served as an impactful, spiritual, and church building pastor within the 1st Episcopal District for over 25 years-pastoring the following churches: Olean AME in Olean, NY, Delaine Waring in Buffalo, NY, Carter Community AME in Jamaica, NY, and Bethel AME in Niagara Falls, NY.

Rev. Reynolds leaves behind his wife of almost 60 years, Irma Taylor Reynolds; their only son, Ronald L. Reynolds and his family, Gloria Reynolds, Sophia Reynolds, Gabriella Reynolds, and Julia Reynolds; brother, Rev. Joseph Reynolds; sister, Lucille(Bobby)Golphin all of Fort Pierce; and a host of nieces, nephews, cousins, and friends who will miss him dearly.

Although many venues have opened and the restrictions of COVID-19 have been relaxed, we at Stone Brothers Funeral Homes are still enforcing the guidelines set forth by the CDC and FDOH to protect our families and our staff. We ask that you respect this, as it could very well save your life. We also ask that you acknowledge and execute the 6 feet social distancing guidelines as well.

Send flowers to the service of Rev. Robert Lewis Reynolds