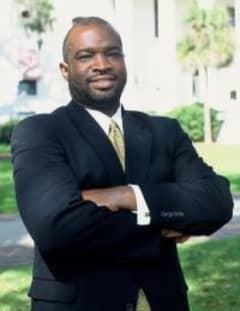 Peter Edward Francis Harris II, J.D., veteran lobbyist and strategic advisor, passed away on Tuesday, December 17, 2019 after an extended illness. Born on October 12, 1964 in Monrovia, Liberia, West Africa, Peter and his family emigrated to the United States when he was a young man. He graduated from Curtis High School in Staten Island, New York (1982). Upon graduation from the University of Miami in Coral, Gables, FL (1987) and The College of Law at Florida State University (1990), Peter grew to love Tallahassee and settled here commencing his lobbying career. For close to 25 years, Peter owned and managed ADG Business and Governmental Consultants. In this capacity, he served business and governmental clients ranging from Fortune 50 firms to state and local governments throughout Florida on a broad range of issues. He also represented statewide associations including the Florida Chamber of Commerce; Associated Industries of Florida; the Florida Cable Telecommunications Association; and the Florida Hospitals Association.

Peter was one of the four originating members of the Florida Association of Professional Lobbyists and as a founder, he chaired the Bylaws Committee which created ethical standards for lobbyists in Florida. He served as President of the Governor’s Club (2004-2005) and in volunteer leadership positions on the Board of Directors for Florida TaxWatch; Florida First Capital Finance Corporation; the Florida Historic Capitol Museum; The Museum of Florida History; and the American Red Cross (Capital Area Chapter) among many others.

He also founded the Florida Leadership Forum to foster leadership on issues of importance to Florida’s African American Community, such as economic and workforce development, healthcare, education and information technology. His pro bono assistance aided descendants of the 1923 Rosewood Massacre to receive reparations from the State of Florida. He provided strategic advice and counsel to countless community-based organizations including the Statewide Conference of NAACP Branches. Peter, son of the late Bishop Francis Harris (Freetown, Sierra Leone) and Mrs. Elvira Harris (Monrovia, Liberia), married his beloved wife of 22 years, Karema Tyms-Harris (Detroit, Michigan) in 1997. Their union was blessed with two extraordinary children who are Caldwell Harris (Tallahassee) and Peter Edward Francis Harris III (deceased).

Peter remained extremely passionate about his family and siblings, Lieutenant Colonel Retired Daniel Harris of Tobyhanna, Pennsylvania; Frances Revels (Cameron) of Hamden, Connecticut; and Safee Florence Broxton (Derek) of Tallahassee. Peter was also very proud of his ancestry which boasts a multitude of aunts, uncles, nieces, nephews, cousins and extended family members residing in America and throughout West Africa. Some of his greatest joys on this earth were found in traveling to places near and far; gardening and discovering plants species; collecting writing pens, and reading all genres of books from his notable personal library. He enjoyed playing tennis and was an avid follower of Formula 1 Racing. Having possessed an extensive network of close personal friends and colleagues, Peter will be most remembered and honored for his great integrity, strong moral character, trailblazing spirit, unwavering faith in God, professional accomplishments, commitment to mentoring others and the grandest voice, laughter and smile of all time.

A funeral mass to celebrate the life and legacy of Peter Edward Francis Harris II will be held at The Co-Cathedral of St. Thomas More, 900 W Tennessee Street on Saturday, December 28, 2019 at high noon (EST). In lieu of flowers, the family respectfully requests that contributions be made to the Community Foundation of North Florida for the Peter Edward Francis Harris III “Be Great” Memorial Scholarship Fund to benefit college bound students interested in pursuing an education in the creative arts.