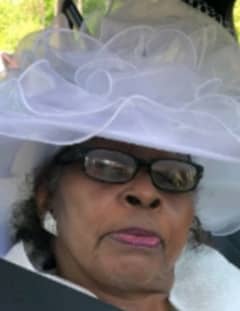 Doris Christine Pharrams was born on January 19, 1940, in Russell County, Alabama, to the late David and Eldosia Jones and granddaughter to the late Reverend John T. and Anna Jones. She made her transition to eternal life on Sunday, October 20, 2019.

Doris accepted Christ as a young teenager and joined Howard Chapel African Methodist Episcopal Church, where she served as a faithful member for over 60 years. Over the years, Doris utilized her gifts and talents for kingdom building and to ensure that she was helping the church she loved so well. Singing in the choir was one calling that brought her an enormous amount of joy. She absolutely loved singing songs from Zion. Additionally, she was a stewardess, a missionary, and the recipient of the 2019 Lay Person of the Year for the Phenix City District, Ninth Episcopal District.

She met Johnnie Lee Pharrams, and they remained married for more than 30 years until his death. Their union produced five children, and Doris was the epitome of a “Stay on your knees” mother. She constantly prayed for her children’s success and always encouraged them to do more regardless of their current situation. Her children were her pride and joy! Doris always provided everyone with frequent updates concerning their accomplishments.

Doris had a passion for flowers and gardening. She enjoyed planting and cultivating flowers with the aid of her “green thumb.” Over the years, she acquired a variety of plants, and she exercised extreme care and passion during the gardening process.

She was preceded in death by her husband, Johnnie Lee Pharrams, and brother, Elton Carl Jones. Additionally, a stepdaughter, Annie Jean (Jeremiah) Lee and stepson, Johnnie B. Pharrams, preceded her in death.

Send flowers to the service of Doris Pharrams