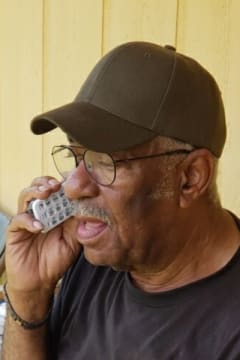 Funeral services for Bennie Lee Garrett of Talladega, 75, will be 11:00 a.m. on Wednesday, January 27, 2021, at Terry's Mortuary Chapel. Pastor Robert Duncan will deliver the eulogy. Interment will be held at 2:00 p.m. at Alabama National Cemetery. Visitation will be 2-7 p.m. on Tuesday, January 26, 2021, at the funeral home.

At an early age, Mr. Garrett dedicated his life to Christ and united with Kingston Missionary Baptist Church. Bennie completed his public school education at Talladega County Training School. He continued his education completing a degree in carpentry and cabinet making at N. F. Nunnelley State Technical College in Childersburg. On October 13, 1967, Bennie enlisted in the United States Army and served honorably until he was discharged on October 10, 1969, at Fort Sill, Oklahoma. During his tenure in the army, Bennie completed culinary school so that he could assist with making sure the soldiers received the proper nutrition to protect our nation. His love for cooking was something that he continued to do when he returned to civilian life along with hunting, fishing, working on cars and even riding motorcycles when he was younger. Professionally, Bennie worked for Crown Textiles, Avondale Mills, Talladega FCI and retired in 2008 from Georgia Pacific.

Bennie was united in holy matrimony to the former Willie Rebecca Battle on December 9, 1971. On Friday, January 22, 2021, God called and Bennie quietly slipped into his eternal rest. He was preceded on the path to eternity by his parents, Eddie Howard and Rolina S. Garrett; a brother, C. D. Garrett; and a sister, Betty Joe Garrett.

Send flowers to the service of Bennie Lee Garrett