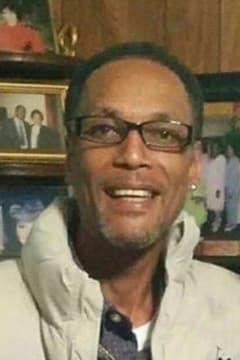 Mr. Berkeley K. Welch began his life’s journey on November 26, 1968, the union of Pastor Bobby James and Mrs. Maggie Jenkins Welch. He was the second child of three.

Mr. Welch joined Africa Missionary Baptist church at a young age and remained a member until his passing. Berkeley attended school in Talladega County before relocating to Detroit, Michigan where he became a member of the 1986 graduating class of Mumford High School. After graduating, he enrolled and graduated in 1988 graduated from Henry Ford Academy: School for Creative Studies. He loved singing, composing music and playing the piano. He loved children. His nieces and nephews brought him much joy. He was known to fix bikes for the neighborhood children and was gifted with the ability to build things.

Berkeley had taken to the nickname of “Nationwide” because of his travels and the numerous cities he lived in throughout the continental United States.

On Wednesday, September 15, 2021, as Berkeley rested peacefully at home, the Lord called him to rest eternally. In his final trip back to Alabama, it was befitting that “Nationwide” was carried across the country making stops in Chicago and Denver before reaching his final destination. He was preceded in passing by his grandparents.

Send flowers to the service of Berkeley Kermite "Nationwide" Welch