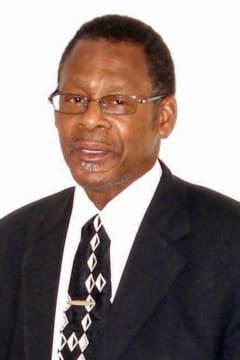 A homegoing celebration for Mr. Dock "Too Sweet" Russell, Jr. of Talladega, 81, will be held at 12:00 p.m. on Saturday, July 30, 2022, at Terry's Mortuary Chapel. Minister Roderick Russell will deliver the eulogy. Interment will be in Westview Cemetery. Visitation for Mr. Russell will begin at 11:00 on Saturday prior to the start of the service.

On Thursday, March 13, 1941, in a small community called Scott Station in Marion, Alabama, Dock Russell and Annie Wheeler Underwood Russell welcomed their first son, Dock, Jr. Life in the Black Belt region of Alabama during this time was difficult, so the Russell family decided to leave Perry County with the hopes of a better life in Talladega.

As a child, Dock, Jr. worshipped with his family at Lilly Hill Missionary Baptist Church. Upon his return to Talladega after retirement, Dock frequented many churches in the community.

Dock began his education at Westside School located in the community where his family made their home. He later graduated in 1963 from R. R. Moton High School. After completing his public school education, Dock enrolled at Alabama A & M College in Normal, Alabama. He decided to major in general science and minor in physical education. During his time as a student at A&M, he ran with the track team, trained in gymnastics and served as a drum major with the Marching Maroon & White. Dock soon realized that school was not for him academically, but he still was a big supporter of Alabama A&M College (University).

Dock left Alabama and made his home in Hackensack, New Jersey. He worked in the public works department for the City of Hackensack until his retirement. After retirement, Dock found his way back to Alabama and immediately went to work in his community. He always found interest in politics, government, continuing education and black history. His passion for change and growth in his community led him to become actively involved in the Alabama Chapter of the New South Coalition and College City Lodge #1171.

Mr. Russell was called to rest on July 25, 2022, at Princeton Baptist Medical Center. He was preceded in death by his parents, Dock and Annie Russell, Sr.; four sisters, Paulette Russell, Peggy A. Hairston, Bettye Sue Jennings and Carolyn Brown; and one brother, James Russell.

Send flowers to the service of Dock "Too Sweet" Russell, Jr.


Honor the life of Dock "Too Sweet" Russell, Jr.