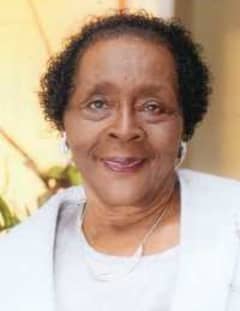 A celebration of life for Mrs. Eliza Kidd Stockdale, 89, will be 12:00 p.m. on Saturday, February 15, 2020, at Kelly Springs Missionary Baptist Church. Reverend L. L. Jacobs is the pastor. Pastor Bobby J. Welch will deliver the eulogy. Interment will be in the Lane Chapel Church Cemetery. Mrs. Stockdale will lie in state at the church one hour prior to the service.

Mrs. Eliza Kidd Stockdale was born on Monday, September 1, 1930, in Talladega, Alabama to the late Henry Kidd and the late Vada Ragland Kidd. Mrs. Stockdale accepted Christ at an early age and united with Mt. Pilgrim Missionary Baptist Church. Eliza served as a Deaconess, missionary and was a member of the kitchen committee. As part of her duty as a missionary, Mrs. Stockdale volunteered with the Red Door Kitchen. She was educated in the schools of Talladega County and was employed with Wehadkee Yarn Mill, Alabama Institute for the Deaf and Blind and Camp Mac. On April 6, 1952, Eliza and James Stockdale were united in holy matrimony and remained in covenant until his passing. Eliza enjoyed cooking and gardening. She loved her church. Her greatest love was for her family. She always made sure to instill values in them, such as obeying your parents so that your days would be longer. There was also a special place in her heart for her daughter-in-law and son-in-law. Eliza departed this natural life and was called to receive an eternal life with God on February 7, 2020. She was preceded in passing by her husband, James Stockdale; her parents, Henry and Vada Kidd; three sisters, Ivory Wood, Mary Embry and Katie Kidd; three brothers, Robert Kidd, Henry Kidd and Nathaniel Kidd; one great-great grandchild, Jordan Collins; and one son-in-law, Mose Swain.

Send flowers to the service of Eliza Kidd Stockdale