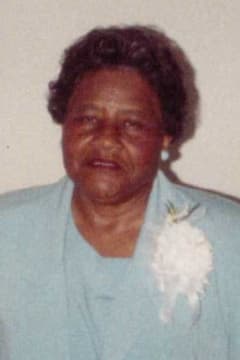 Graveside service for Mrs. Gladys Alberta Simmons, 98, will be held at 2 p.m. on Thursday, September 16, 2021, at Mt. Olive MBC Cemetery in Childersburg. Reverend Jerry Jones will deliver the eulogy. Visitation will be from 1-7 p.m. on Wednesday, September 15, 2021, at the funeral home.

Death is only a door set inside a garden wall. A Fallen Limb A limb has fallen from the family tree. I keep hearing a voice that’s saying, grieve not for me. Remember the best time, the laughter, the songs and the good life I lived while I was strong. Continue my heritage, I am counting on you. Keep smiling and surely the sun will shine through. My mind is at ease and my soul is at rest. Remember you all, I truly was blessed. Continue tradition no matter how small. Go on with your life, don’t worry about falls. I miss you all dearly so keep up your chin until the day comes when we gather again.

Gladys Alberta Garrett Simmons was born July 16, 1923, to the late William Mack Garrett and Augusta Rosalind Anderson Garrett. She spent her early childhood in a section of Childersburg, Alabama called ‘The Area’. She attended school at Mount Olive Baptist Church in The Area. She also went to Spelman College for two years. When the Powder Plant came through in 1943, the family was separated. Some went this way and some went that way. Gladys Alberta lived in Shelby County for a while and then she met Willie Floyd McElrafth. They were married and to this union one child was born James Henry McElrafth. Alberta said that was the happiest day of her life when James was born.

They stayed in Talladega County for a while, but was divorced before James was one year old. Alberta went to Michigan and there she met Roscoe Conklin Simmons Sr. To this union one child was born, Roscoe Conklin Simmons Jr. After divorcing Roscoe Sr., she and her two boys returned to Alabama. Alberta was a hardworking, independent and family oriented woman who juggled the responsibility of working in Michigan and Alabama, raising two boys and a granddaughter and caring for her parents. She worked for Carter’s Grocery Store in Ecorse, Michigan. After working for a few weeks, Mr. Carter gave her the responsibility of managing the entire store. Upon returning to Alabama, she worked for Kroger Grocery in Childersburg where she retired.

Alberta worked many jobs during her 98 years and every one of her employers were sad when she left.

Although she and her husbands were not married very long, Alberta made a lasting impression of love on the siblings of both husbands. To this day they still call her ‘Aunt Gladys’.

Alberta was a faithful and active member of Mt Olive Missionary Baptist Church in Childersburg. She was accepted as a mother of the church. She made sure the pastor had water and whatever he needed on Sunday. Let’s not forget, Alberta was a great cook and could cook anything. She would cook pies and cakes and take them to the church. People would say, “I’ll buy this pie”, “you gotta make me a pie like this” or “you gotta make me a cake”. Cooking was her passion that began at age six.

Send flowers to the service of Gladys Alberta Simmons