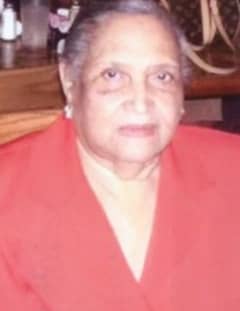 A celebration of life for Mrs. Glovinia Babbs, 90, will be 1:00 p.m. on Saturday, September 14, 2019 at Greater Ebenezer Missionary Baptist Church. Pastor A. G. McKinney will be the eulogist. Interment will be in Midway Memory Gardens. Mrs. Babbs will lie in state at the church one hour prior to the service. The family will receive friends Friday, September 13, 2019 from 5-7 p.m. at the funeral home.

Mrs. Babbs was a longtime member of Greater Ebenezer Missionary Baptist Church. She was a graduate of Choctaw County Training School. Glovina lovingly raised and cared for her children and eventually her grandchildren each day. She enjoyed watching soap operas, reading and cooking in her spare time.

On the evening of Wednesday, September 4, 2019, Mrs. Babbs answered the call of her Lord and Savior. She was preceded in passing by her husband, Eugene Babbs; two sons, Douglas Glover and James Glover; one granddaughter, LaToya Glover; her parents, Douglas and Sallie Eubanks; one sister, Florence Brown; three brothers, Warren Eubanks, Douglas Eubanks, Jr. and Leslie May; two sisters-in-law, Kizzie May and Lucille Eubanks; two brothers-in-law, Elisha Brown and Lamar Ward; and one daughter-in-law, Elizabeth Glover.

Send flowers to the service of Glovinia Babbs