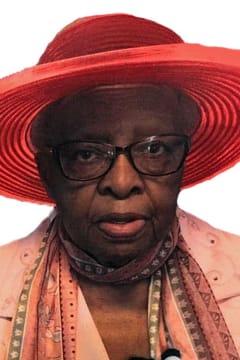 A celebration of life for Mrs. Lezonial Lane Wilson of Eastaboga, 86, will be held at 11:00 a.m. on Saturday, January 15, 2022, at Terry's Mortuary Chapel. Elder Clyde Lane will deliver the eulogy. Interment will be in the in the Pine Grove Church Cemetery. Visitation for Mrs. Wilson will be from 1-7 p.m. on Friday, January 14, 2022, at the funeral home.

On the 22nd day of November, 1935, in Eastaboga, Alabama, Henry Lane and Cussater Hall Lane became parents to a baby girl, Lezonial. During her lifetime, she would be known as Lee, Aunt Lee and Mama Lee by her loved ones. The bible states in Acts 16:31 “Believe in the Lord Jesus, and you will be saved—you and your household.” The Lane family did just what the bible says and united in faith with Pine Grove Christian Methodist Episcopal Church. At an early, Lezonial began her work in the church and it carried her a lifetime. She served as church secretary and read announcements on Sunday morning. Lee also held the position of Sunday school superintendent, cooked as a member of the kitchen committee where she was known for her sweet potato pies and worked on the Trustee board until her health began to fail.

Lezonial began her public school education at Eastaboga School and later completing it at Talladega County Training School. Lee put her culinary skills to work feeding children at Ophelia S. Hill High School often giving extra food to those that she knew were in need. Additionally, she would drive the school bus for the school system. Once leaving the schools, Lee began working at Quality Manufacturing until her retirement. Lezonial found joy in gardening and caring for her flowers. She had a green thumb and was still tending a flower she received from her mother’s funeral in 1981. Lee did not have any children of her own, but she mothered many in her family and others she knew that were in need, down-trodden and incarcerated. In addition to the work that she did, Lezonial found love and married Robert Wilson. Their union lasted until his passing on August 5, 1997. Mrs. Wilson traded her time here on Earth for her eternal reward on Sunday, January 9, 2022. Waiting to welcome her were her husband, Robert Wilson; her parents, Henry and Cussater; two sisters, Geraldine Woodard and Margaret Lane; and four brothers, Roosevelt Lane, Earnest Lane, Nathaniel Lane and James H. Lane.

Whether you call her Lezonial, Lee, Aunt Lee or Mama Lee, her memory will live on in your hearts. She leaves behind two sisters, Juanita Johnson and Gloria Elston; one brother, Sherman (Barbara) Lane; and a host of nieces, nephews, other relatives and friends.

Send flowers to the service of Lezonial Lane Wilson