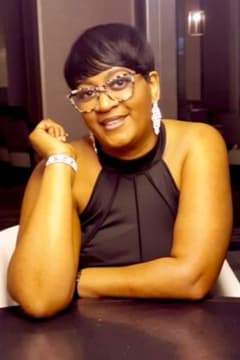 A celebration of life honoring Misty Michelle Allen Oden of Oxford, 48, will be held at 2:00 p.m. on Tuesday, August 16, 2022, at Terry's Mortuary Chapel. Reverend Clint Walker will deliver the eulogy. Interment will take place in the Bethel Church Cemetery immediately following the service. There will not be a public visitation.

Misty Michelle Allen was the fifth of six children born to the union of David Sam Allen, Jr. and Patsy Ann Johnson Allen in Talladega, Alabama.

In her early years of life, Misty grew up in Alpine on what is now known as Paul Bear Bryant Road. Everyone on the road was family with the exception of those that occupied Camp Cosby. She followed in the steps of her forefathers and united with Bethel Missionary Baptist Church. Her education was received in the schools of Talladega County and she was a member of the 1992 graduating class of Talladega County Central High School. Many of her days were spent going between her parents’ home and the home of her paternal grandparents. During this time of her youth, her mother became ill and relocated to New York for care. John, Regina and Misty stayed in Alabama with their father while Kermit, Marcus and Bernard went to New York with their mother. Misty had a heaping helping of the country life since she remained in Alpine whether it meant picking blackberries for her grandmother’s Sunday cobbler or rescuing one of the goats from the barbwire fence of which she admitted she would never have done in her later years. Misty had a servant’s heart which led her into a career in the medical field. She was employed with Fresenius Medical Clinic until her health began to fail. After many years of being together, on August 6, 2020, Dwayne Oden took Misty’s hand in holy matrimony and together they became the parents of five adult children.

Shopping, going to the beach, watching Hallmark movies, couponing and reading were among some of the things you would find Misty engaged in when she had free time. During football season, you would definitely hear her screaming “War Eagle”. Many things can be said about Misty, but one thing that was definite is that she loved her family. When Misty found out about her illness, all she wanted to do was spend time with her family and she did not want folks to make a fuss over her. She quietly fought to live and enjoyed her last days.

The faithful love of the Lord never ends! His mercies never cease. (Lamentations 3:22) Misty fought a good fight. She was terrified and had no control over anything that happens, but she knew that God loved her and she submitted to the Lord’s will and he gave her peace and rest on the morning of Tuesday, August 9, 2022. By the grace of God in Christ she was reunited in paradise with her parents, David S. Allen, Jr. and Patsy Allen; her grandparents, Loise (John T.) Garrett, David Allen, Sr. and Hester R. Webb; and her niece, Anieya Jones.

Send flowers to the service of Misty Michelle Allen Oden