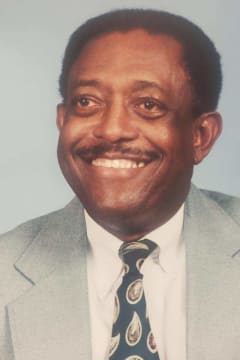 Armond Thomas, Jr Teacher, Counselor, Deacon, Pool Hustler, Almost Doctor, Guinness Record Holding Card Player, Master Napper, Unicorn Armond “Ace” Thomas Jr was born on October 15, 1937, in Panola, Alabama to Lily Pearl and Armond Thomas Sr, and passed on Saturday, August 14, 2021. At an early age Ace knew he was destined for greatness. Realizing that a little country town was too small for his big dreams, Ace insisted that they move to the “Big City” and at the age of seven, the family finally yielded and moved to the very “metropolitan” city of Tuscaloosa, Alabama, where he lived until his passing. In 1952, he accepted Christ and was baptized, joining the Weeping Mary Missionary Baptist Church where he was always a faithful and dedicated member. During this time, he served under the leadership of four church pastors and in almost every church role from Junior Usher to Deacon. As a child, Ace was known for being a highly enthusiastic student. In fact, he enjoyed the second grade so much, he “decided” to take that grade twice. After graduating from Druid City High School, he began his studies at Stillman College. Before he could finish, however, the military realized they were woefully behind the curve in the medical sciences. In true “Armond Jr” fashion, he put his future on hold for the greater good and “joined” (by way of the draft) the U.S. Army and was sent to Germany. Germany never knew what hit them. It only took two years for Ace to modernize the whole operation, and realizing that his work there was done, he returned and graduated from Stillman College. During this time, he met the love of his life, Chestine “Tina” Thomas. After years of dating (and begging and pleading and making promises he had NO CHANCE of fulfilling), she finally gave in and agreed to marry him. They remained “happily” married for fifty-five “glorious” years, and had the two best sons a couple could have ever imagined (especially the younger one). After college, Armond began his career in education as a high school civics teacher. In some circles, he was known as the nation’s best civics teacher, in others the nation’s best overall teacher (all the people in those circles had the last name Thomas, but that’s beside the point). During this period, he also earned a Master’s degree from the University of Alabama where he astounded his professors with his almost otherworldly writing ability. The secret to his success once again was his beautiful wife Chestine. Anyway, transitioning to high school counselor proved to be his true calling. His ability to say “Um Huh” and “How does that make you feel?” while completely asleep definitely helped. During his 30-year counseling career, in some circles he was known as the nation’s best high school counselor, in other circles the world’s best human being (same circles as before; you get the picture). In truth, Armond was known for a few things: he was a great listener and trusted advisor; he was a truly gifted teacher both in the classroom and in life; he was a fierce friend; he was a great son, a loving husband and the best father. He was real-life hero. If unicorns exist, he was one. During his life, he touched thousands of souls and we were all made better for it. He was loved by us all and will be dearly missed. Armond is survived by his loving wife, Chestine Thomas; his elder and most useful(or less) son Armond “Tracy” Thomas III and his wife Mia Elliott Thomas; his younger, quiet and most charming son Andre Armon Thomas and his wife Nelmary Villa-Thomas; five grandchildren, Armond “Dru” Thomas IV, Raymond Chase Thomas, Rudy Emmanuel Villa (Thomas), Emily Azucena Thomas and Noah Armando Thomas; a younger Brother and best friend Eddie B Thomas; four sisters-in-law; seven nephews and nieces; four pseudo nephews and niece; a host of great-nephews, nieces and pseuds; and a nearly countless number of extended family members (because if he touched your life, you were family).

Send flowers to the service of Deacon Armond Thomas, Jr.