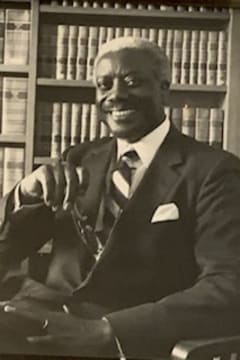 On November 7, 2021, longtime educator, Dr. Herman B Smith, Jr. departed this world for his eternal rest. Smith got his professional start in the Alabama public schools system, initially as an English teacher at the Greene County Training School. He went on to become the Vice Principal at Druid High School before furthering his education and professional growth.

Smith had a long and varied career. He was an officer in the United States Army; university professor, consultant, and most notably President at several Historically Black Colleges and Universities. He was the Chancellor at the University of Arkansas at Pine Bluff from 1974 to 1981; and thereafter served at different times at Jackson State University in Jackson, MS, Central State University in Wilberforce, OH, and Morris Brown College, in Atlanta, GA.

Smith’s Alabama connection run deep, he married the late Annie Mae Lavender of Tuscaloosa in 1951 and became a beloved member of the Lavender family. This union produced a son, Gregory and daughter, Terri Lynne.

In recent years Smith suffered from Alzheimer’s disease and ultimately succumbed to it. However, in life he was ebullient, unfailingly positive, and dedicated to service and family.

He was preceded in death by his parents; wife Ann; sister, Mary Bailey; and sister, Margaret Parks.

Send flowers to the service of Dr. Herman B. Smith, Jr.

Honor the life of Dr. Herman B. Smith, Jr.