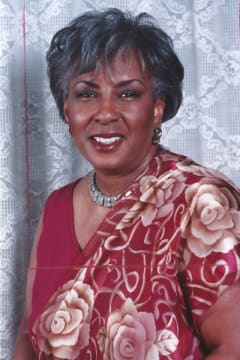 Van Hoose & Steele Funeral Home, Inc. announce with the deepest sympathy the passing of Mrs. Ethlyn Deletha Drake-Porter of New York and formerly of Tuscaloosa. Mrs. Drake-Porter is the daughter of the late Mr.& Mrs. Fred and Leslie Drake.

Services will be in compliance with the State of Alabama mandate and the City of Tuscaloosa. Please adhere to the social distancing guidelines. All attending must wear a mask.

There is something melodic in just saying her name but, in our house, she was our “Mommy”. As we got older, we called her “Mother”. It was easy to figure out where someone knew her by what name they used when addressing her. In Tuscaloosa, and especially with the family, mother was known as “Deletha”. In Chicago, she was “Dee Porter”. But in New York and other parts she became known as “Dee Drake-Porter”. Mother loved her hometown of Tuscaloosa. She proudly told people she was born on February 20, 1944 on the campus of Stillman College and was named “Ethlyn” after the Nurse who assisted in her birth. She spent her formative years and much of her adolescence growing up in the Jackson Avenue – Daly Bottom community. This community was a safe haven and a place of black excellence, extremely tightknit - so much so that her mother, Leslie B. Drake, chose her middle name after speaking with a nearby neighbor named “Dolucie”. If the city had not acquired her maternal Grandmother’s (Lucy Drake) property through eminent domain, the family possibly would not have eventually moved to the College Hills area. She also boasted about being a Druid High School graduate and being on the honor roll was just expected in the household, especially if your father (Fred Drake) was the Vice Principal and History teacher. She even said that when she would sign up to take non-academic courses like drivers’ education, her father would retrieve her schedule and sign her up for a math, English or science course. She wanted to be a majorette in the band, but her father would not allow it. So, she had to settle on playing the clarinet in the band. In September 1962 after high school she chose to attend Knoxville College in Knoxville, Tennessee because she did not want to follow in her big sister’s (Charlotte Jean Goodson Reid) shoes and attend Tuskegee University. As a music education major with a concentration in voice and a minor in piano and organ, she enjoyed singing in the choir under the direction of Dr. Roland Carter. While in college she met and married her classmate, Jerry James Porter. After getting married they moved to Chicago, Illinois to start their life because Jerry had a job on the railroad. Their union bore two children – Kevin J. Porter and Valencia D. Porter. It was not uncommon for them to host large gatherings of their college friends and family throughout the year. Mother loved a great party and was a fabulous party planner. Even for our birthday parties, she was so meticulous about each detail and especially the birthday cake. Mother never gave up. After the end of her marriage, she forged on and started over. Instead of pursuing music Mother started working as a Secretary for some companies like Soft Sheen/Ultra Sheen and the Chicago office of the Harlem Globetrotters. She did this while also pursuing her bachelor’s in business administration with a concentration in Management and in 1974 she received her degree from Chicago State University. Mother was a trailblazer. In 1975, she joined the Milwaukee Railroad as a Marketing Analyst in the Grain and Food Profit Center. She was the first woman and only minority manager. Her hard work paid off and she was promoted to a new role of Administrator of the Minority and Women Business Enterprise Program (MBE/WBE). Her superior writing skills also paid off as she is credited with designing and implementing the Milwaukee Railroad’s MBE/WBE Program in accordance with the Railroad Revitalization and Regulatory Reform Act of 1976 along with other relevant federal and state regulations. Upon approval of the program by the Federal Railroad Administration (FRA), it became the model used by other Railroads and Mass Transit agencies. Mother seemed to have found her niche and took on greater responsibilities when she became a Consultant with the U.S. Department of Defense working as a Regional Director for the Booker T. Washington Foundation. In 1984 the Governor of Illinois, Hon. James R. Thompson, became aware of her work and appointed her to be the Executive Director of the Statewide Minority and Women Business Enterprise Programs for the State of Illinois. Here again she led by designing and implementing the first Disadvantaged/Minority/Women Business Enterprise Program that included contracts administered by AllState agencies. In 1988 she was heavily recruited by the New York City Transit Authority and began as a Director in its Department of Affirmative Action, Business Service Programs. She left after two years and worked as a Consultant with The Tetra Group – New York State Department of Transportation Supportive Services Program. In 1991 she joined the New York City Housing Authority as a Director in the Office of Small, Minority and Women Business Enterprise. She returned to the Metropolitan Transit Authority in 1994 as a Contract Compliance Manager wherein she retired in 2011. During her career, Mother received several awards and recognitions including the Community Service Award by the Brooklyn Chapter of the National Business & Professional Women (2001), Distinguished Humanitarian Award from NYS Senator John L. Sampson (1999), the Colloquy Award given by the New York Coalition, and the EnVerite Progressive Charity Club’s Progressive Charity Club (1985).

Whenever possible, Mother would travel with family and friends and just like her mother loved to dance. She was also a serious bid whiz player and often took time to mentor many young people. She was an active member of the Women Empowerment Movement and later with “Sisters-Standing-Strong”. Within the group she was considered the Matriarch and the Keeper of Decorum. She loved her family and friends dearly. She is preceded in death by her sister Charlotte Jean Goodson Reid, her mother Leslie Barnes Drake and father Fred Drake. She is survived by her children Kevin James (Cherise) and Valencia Darnette; her grandchildren Shakeya Giovanni (Chris Briggs) and Kearra Roget’ Dominique; Aunt Ida Barnes McCampbell; nephew Reginald Leander Reid (Lorrie) and Daphne Lissette Reid-Herrin (Eddie); maternal cousins Ernestine Long (Jimmy), Johnnie Mae Stokes, Valerie Morrow Programs (Oliver), Roselyn Hagins Duncan (Wayne), Hon. Artis J. McCampbell (Dianna) and Brenda McCampbell Lyons and a host of close cousins, many Druid and Knoxville College friends, like her college roommate, Frances Epps, James and Mary Moss, Thelma Wesley, Ledora Beard, Edith Matthews, Noah Robinson, Tippy, Bernice Wilson,and other friends throughout the world.

Send flowers to the service of Mrs. Ethlyn Deletha Drake-Porter 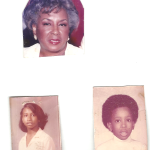 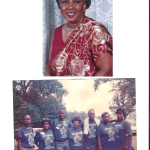