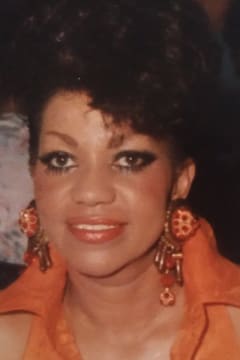 Celebration of Life service will be held Saturday, October 30, 2021, at 3:00 p.m. at our Hattie G. Watkins Memorial Chapel 163 North Ave. Jonesboro, GA 30236. *Service can be watched via Facebook live at https://www.facebook.com/watkins.jonesboro/

The LORD gave Annie Myrle Foster Hudson to the world on Saturday, September 25, 1948. She was an American citizen in Jonesboro, Georgia of Clayton County. Her delivery was by midwife Mrs. L Meadows in the home of her parents Elijah and Emma Foster who were a 50 years old farmer and a 32 years old housekeeper. Annie Myrle's siblings were Tommie Joe, Clifford, Huey, Evelyn, Corine, Christine, Geraldine and Thelma. They lived on Fielder Road for a while but eventually moved to a more private location and built a three roomed home on Hwy 138 east. Although the house had minimal rooms in comparison to the houses of the twenty first century, the land was spacious, with an exceedingly long driveway and left much room for play, gardening, community picnics and raising livestock. This experience led Annie Myrle to enjoy eating pickled foods, picking plums, berries, apples, pecans, and wild flowers as well as cultivating yards throughout her life. She became a member of Dixon Grove Baptist Church on Fielder Road in Jonesboro, Georgia some time in her childhood moved away from Jonesboro for years; then later returned to Dixon Grove in 1983.By that time she was bountifully blessed financially and enjoyed giving far above a tithe. While she served with her sister Christine and a few others on the Willing Worker's Committee, temporarily led Young Adults Group: Christians on a Mission a few years later, Annie Myrle was mostly known for her organizing and leading one of the church's biggest community/social events: the Fashion Shows. She engaged the interest of Cecelia and Miko into the Adult services by recording the sermons and discussing them during the car rides home and throughout the week. Yet it was not until a decade or so later that Annie Myrle discovered the meaning of a transformed life, and started journaling on audio cassettes reading and applying scriptures to her circumstance and emptiness. Unbeknown to anyone until the cassette was played years later, in 1998 she prayed, "Lord I want to grow in my faith..."And a few years later, the LORD let her live on a Christian campus with her daughter Cecelia, and she grew bountifully in her understanding of the Bible and Christian life. She was a believer and developed a better relationship with Christ, attended Women's Bible Studies, sat in a few Seminary classes, attended campus seminars and Gospel choir concerts, plays and the like. She was not a devout Christian, but she was a Christian who believed and lived by certain Christian convictions. The Biblical books that drew her attention the most were Genesis, Job, Proverbs and Psalms. She enjoyed the sermons more than the rest of the service, although she deeply appreciated the note singing from her mother's generation. She recorded her home Pastor James E. Harris weekly, appreciated the teachings of Rev. Willie Starkes for years. Then branched out to Jasper Williams (for a season) and Charles Stanley )for a life time), Dale and Nate Bronner (The Bronners of Bronner Brothers) (occasionally) and concluding with Anthony George (until her passing). Annie Myrle blossomed in Home Economics which eventually led her to be crowned Miss. Home Economics. Annie Myrle decided she should be called Anne once out of rural Georgia. She was very ambitious and after owning two unsuccessful Wig salons, a little over a decade later, she opened a salon that was more Cosmetological, and she was a success. As in that interim, she worked for Bronner Brothers known for its BB hair products. Her skills and training continued to excel and her responsibilities and positions continued to increase. She met several celebrities and politicians, who were so impressed with and appreciative of her work, that they became her clients as her new business Classic Designs, Inc. At the age of twenty one she gave birth to a daughter Cecelia. A few years later she met Gerry Hudson in 1976, and they married in 1979.Anne had daughter Cecelia by a renown interstate truck driver Joe Jones, and Gerry had a daughter Miko. They loved the girls but wanted a son, of which they were blessed with in 1982 and accordingly named him Gerry Jr. Anne touched and impacted lives of various races loving all people the same and was proud that her clientele was diverse. She was ambitious, EXTREMELY giving, compassionate and EXCEPTIONALLY talented. Her legacy exceeds this skeletal on-line obituary and will be discussed more indepthly at the memorial service. We just cannot believe she is suddenly gone. But thankful she surrendered her life to the Lord and acknowledged Jesus on earth, confessing her sins and receiving His forgiveness, calling Him Father here on earth. So that now she is home with Him now in Heaven. Make this decision and ask a minister about Romans 10, John 3:16, 2 Timothy 3:16 and 1 John chapter 1 in a Holy Bible book.

Send flowers to the service of Annie Myrle Foster-Hudson