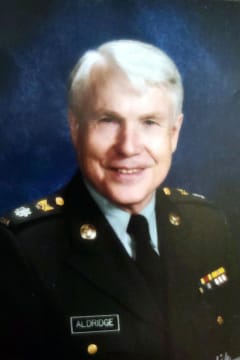 Aldridge was born in Juliette, Ga., on Sept. 30, 1939, the only child of J.H. Aldridge, a high school principal, and Willie E. Wilson, a housewife and textile worker.

Aldridge taught broadcast production courses and advised students in the Radio-TV-Film department of the Grady School for 14 years, which ended in 1976. "Prof. Aldridge had a joyful attitude toward teaching," a former student recalled. After a brief stint as an on-air, weekend news reporter for WSB-TV in Atlanta, Aldridge became a field representative in Iowa for the Atlanta-based cable industry pioneer Dowden Communications.

Aldridge returned to academia in 1986 and taught journalism at Brenau University in Gainesville until 1994. His last employment, from 1995 to 2006, was college counselor at Riverside Military Academy, a private boys’ prep school in Gainesville. His marriage to Nancy Pittman ended in divorce; together they had a daughter, Ashley. He is also survived by a long-time companion, Roberta Rhodes of Union Point.

Aldridge’s early experience as a musical performer was formative. “Larry’s interest in television, as well as his talent as a singer, were nurtured early as he performed regularly as a child on a local TV program in Macon,” recalled a musician friend. As an adult performer, Aldridge was the vocalist for a pop band called the Herbie G Quartet. “He was a crooner, sort of a cross between Pat Boone and John Davidson,” the musician added.

Send flowers to the service of James Aldridge

Honor the life of James Aldridge