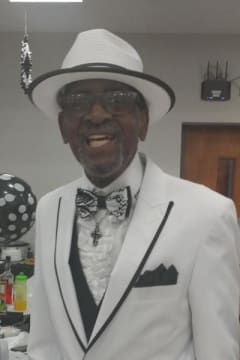 -The Obituary- The Sunrise of Life for Mr. Joel Deforest Sanders, Jr. began on March 14th, 1945. Joel, affectionately known to all as J.D., DJ and Deacom, was born to the union of the late Joel D. Sanders, Sr. and Zera Lee (Miller) Sanders in Cherokee County, Alabama. After relocating to Etowah County, Alabama, at an early age, J.D. confessed his belief in Jesus Christ at Mount Pilgrim Baptist Church in Gadsden, Alabama.

J.D. was formally educated in the Gadsden City School System and there is where he met the love of his life, Sandra Marie Lowe. J.D. and Sandra were united in holy matrimony on August 14th, 1962 and through this union they were blessed with six beautiful children. After 22 years of being apart, they decided to reunite and married again on June 25th, 2017.

J.D. answered the call of his beloved Savior, Jesus Christ and transitioned from this earthly life on September 30th, 2020 after fighting the good fight of faith. He is now resting in the arms God. To know J.D. was to love him. You would also know that he enjoyed fishing, hunting, gardening, swimming, cooking and working on cars. In his early years you could find him at 6th Street swimming pool serving his community as a certified lifeguard, or you may have enjoyed some of his excellent cooking at McQuen’s BBQ where he worked as the Pit master. J.D. was employed at Sears Automotive Center where he worked for over 30 years until his retirement. Throughout his employment he attended Sears Technical Institute where he received numerous certifications to master his skills as a mechanic. J.D. was a passionate sports fan and enjoyed watching his favorite college football team, the Alabama Crimson Tide. He was always a stylish dresser and looked his best when he attended events, especially the Black and White Ball. But the greatest joy of J.D. was spending time with his family whom he deeply loved. He always tried to attend all family gatherings until his health declined. He was preceded in death by his parents, J.D. Sr. & Zera Sanders, brother, Larry “Polly” Sanders, sisters Geraldine Staten and Willene Crawford. He leaves to cherish his memories his loving wife, Sandra M. Sanders, six children: Jacqueline Collins Sanders of St. Louis, MO, Sharon Sanders Vickers of Gadsden, AL, Joel D. (Nicole) Sanders, III. of Rainbow City, AL, Eric F. (Kerri) Sanders and Parrish L. (Tina) Sanders, both of Gadsden, AL, and Frederick L. (Vivian) Sanders of Anniston, AL. Sibling: Donald Sanders of Cleveland, OH, brothers in law: Tracy (Veronica) Lowe of Gadsden, AL, Kenneth Lowe of Elmira, NY, Randolph Smith of Los Angeles, CA and Michael Wayne Lowe of New Haven, CT. Sisters in law: Constance Chisholm of New Haven, CT, Diane LeSeur of Anchorage, AK, Delilah Hampton of Buffalo, NY, Kim Lipsey of St. Louis, MO, Paris James of Cary, NC, Rachel Parker of Austell, GA and Carolyn Sanders of Gadsden, AL. Special niece Mrs. Lizzie Jenkins; special friends, Thomas Graham and Marcus Lavon Mason; and a host of grandchildren, great grandchildren, nieces, nephews, cousins, and a host of relatives and friends

Send flowers to the service of Joel Deforest Sanders