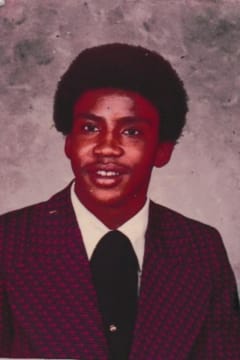 He was baptized at Mt. Pilgrim Baptist Church under the pastoral care of Rev. William Mallory. A graduated from Gadsden High School -- Class of 1975. After graduating, he joined the United States Air Force where he served his country in active military duty for the next eight years. He ended his active duty service at Travis Air Force Base in California and received an honorable discharge. He continued to work for the federal government as a contractor in California for several years before returning to Alabama. Al He had a talent for drawing and sketching. Upon his return to Gadsden, Al he continued in governmental employment for a time with the Anniston Army Depot. He was employed at Koch Foods at the time of his passing. He and his wife Anna (Hatcher) Wright were parents to three sons. Craig (Casey), Dante and Alan (A.J.) Wright, Jr. and one granddaughter, Malayala Phillips who will mourn his loss and cherish his memory. Alan was preceded in death by his parents Lee and Dorothy Wright, brothers, Michael E. and Maurice K. Wright. Other family members and relatives who will miss him include brothers, Gerald and Kenneth Wright, both of Gadsden; Dyran (Cynthia) Wright of San Antonio, Texas; sister, Kathy (Walter) Brown of Gadsden; aunt, Ruth Battle of Cleveland, Ohio; the Bostick family and a host of nieces, nephews and cousins. Thanks to the management and employees of Koch Foods. Special thanks and appreciation to his work-brothers Ronald Nunn, Darrell Brewster and David Childers for the kindness shown to Alan. A private family gathering will be held at a later date.

Arrangements under the direction of West Gadsden Funeral Home. 256-549-0004

Send flowers to the service of Mr. Alan Everett Wright