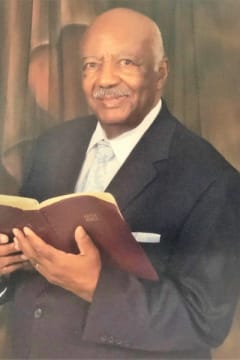 Garnett had every gift, including length of years, 100 years and 102 days on this earth.

His story starts on March 14, 1920. He was the fourth of six children born to Tee McLeonard and Addie Ola Taylor in Yazoo City, Mississippi and was the longest living of his siblings. Born into a deeply religious family, Garnett learned about the Lord at a very early age and accepted Christ in his life at age nine. He was kind, compassionate, giving, and loving. He firmly believed in God, the practice of his faith, solid family ties, and advancing one’s education. He was a loving son and brother, a faithful and supportive husband, and a devoted father, grandfather, and great-grandfather.

In 1940, Garnett graduated high school from Yazoo City High School No. 2. He served in the U.S. Armed Forces, and after his enlistment, he graduated with a Bachelor of Arts (B.A.) degree from Alcorn A&M College in Lorman, Mississippi. He was a member of the Phi Beta Sigma Fraternity.

In December of 1946, Garnett married Louvenia “Sally”, who preceded him in death. To that marriage three dearly loved children were born.

In 1959, the family moved to Los Angeles, California where he worked as a civil engineer at Lockheed Martin and McDonnell Douglas in Anaheim and Long Beach, California. In 1964, the family relocated to Kansas City, Missouri. During his life in Missouri, Garnett briefly worked as a high school teacher before joining the Bendix Corporation as a HVAC Engineer, where he remained an upstanding employee until he retired in 1987. He also became a Prince Hall Free Mason of Kansas City, Missouri.

Throughout his life, not only did he develop and nurture new and old friendships, he shared his faith with a multitude of people. After retiring, he and Louvenia took residence in Canton, Mississippi, where he rejoined Mt. Vernon Missionary Baptist Church and then South Liberty Baptist Church, serving as a member of the deacon board for several years.

Send flowers to the service of Garnett Clemon Taylor, Sr.