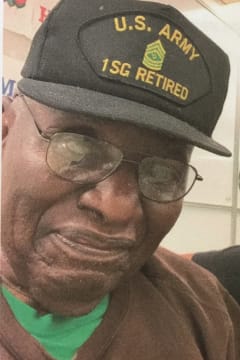 Joseph Paul Graves entered this realm on February 18, 1932 born to Mamie and Eddie Graves in Waverly Virginia. Joseph took his rest on August 30, 2021 and is survived by two sons, Edward Graves of Stone Mountain Georgia and Jermaine O’Bryant (Alexis Sharnae O’Bryant) of Fort Bragg North Carolina. Siblings Mary Jeter of White Plains New York, Cleveland Graves of Mount Vernon New York, Sally Jones of Waverly Virginia and Alma West (John West) of Halifax Virginia. Grand Children Aubrey Graves 23, Jackson Graves 8, Don’Tavious Allen 17, Jermaine O’Bryant Jr 7, Jace O’Bryant 3, Jadah O’Bryant 16, Payton O’Bryant 9. Four siblings transitioned several years prior, Clifton Brown, Lucile Jones, Patricia Staley and Vernon Graves who is survived by his wife Ophelia Graves and a host of other nieces, nephews and friends. Joseph had a storied 30 year career in the United States Army that took him to places on the globe both peaceful and dangerous. He served in campaigns in South Korea and Vietnam. He was stationed at several other posts in Germany as well as Fort Dix New Jersey, Fort Ord California, Fort Sam Houston Texas and lastly Fort Gordon Georgia where he eventually retired and settled. Upon his retirement from the United States Army, Joseph worked several jobs but he never considered them real jobs. He playfully referred to them as just something to keep him occupied. Throughout his life, he was known to many and was called by different titles and nicknames. Joe, Joseph, Joe Frazier, Top, 1st Sergeant, Dad, Pops, Deacon Graves. He wore each of those titles proudly and was rarely seen without his signature smile followed by his witty nature and infectious laugh. Very few ever walked away without a story and some piece of advice on life or work or love; sometimes all three. He would say sternly “ you don’t need an alarm clock, your responsibilities are supposed to wake you up in the morning” and he certainly lived his life by that creed. One of the jobs and titles he took most seriously was one that did not pay in monetary terms but one that satisfied his very soul and that was the title of Deacon. He became a devoted member of Broadway Baptist Church many years ago where he served faithfully until health began to interfere with his duties but he would always continue to speak of his love of God and his Church home. He will be missed greatly but his legacy will continue on through his family and friends.

Send flowers to the service of Mr. Joseph P. Graves