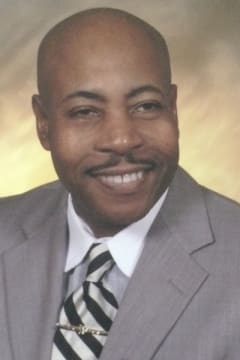 Reverend Oscar Olin Brown, Jr. was born, February 28, 1958 to the late Oscar O. Brown, Sr. and the late Naomi C. Brown in Harlem, NY. He was raised in the “Big Apple” where he attended public elementary school, then the Horace Mann-Barnard Preparatory School in Riverdale, NY. Having been called to preach the Gospel at the age three, he delivered his first public sermon at the age of eleven. He was licensed at the age of eighteen and ordained at the age of thirty. Reverend Brown’s artistic gifts were realized at an early age. As a child, he won a scholarship to Brooklyn’s prestigious Pratt Institute, and had work exhibited in Manhattan’s Metropolitan Museum of Art.

Reverend Brown holds both a Bachelor degree in Communications and a Master degree in Education from The City College of New York. In the early 80’s, he auditioned for and was awarded his own radio program, as a gospel music disc jockey with New York’s American Broadcast Studios. In the late 80’s, Reverend Brown entered the New York City Public School System as an elementary teacher in Harlem and in the South Bronx. Having been a faithful member since childhood of the Mercy Seat Baptist Church of Christ, pastored by the Reverend Paul William Hayes, he served as assistant pastor, co-pastor, and then (during the pastor’s illness) pastor.

In 1994, Reverend Brown joined the Canaan Baptist Church of Christ, pastored by the Reverend Wyatt Tee Walker, former Executive Director of the Southern Christian Leadership Conference (SCLC) under the Reverend Dr. Martin Luther King, Jr.. Reverend Brown was appointed Minister of Christian Education by the pastor. He also served in the church’s outreach and political action ministries and was a supporter of the Reverend Al Sharpton. He was also on the ministerial staff of Canaan in his senatorial and mayoral bids.

In 1998, Reverend Brown relocated to Georgia and joined the faculty at Paine college as Instructor of Reading. There he taught English. In 2001, this affiliation took him to Vera Cruz, Mexico to deliver a paper at the Association of Caribbean Studies. In 2003, he was promoted to Assistant Professor of Reading. It was his honor to be appointed Grand Marshall by college president, Shirley A. R. Lewis, for the 2002-2003 term.

Reverend Brown was an Associate Minister at Good Shepherd Baptist Church under the leadership of Pastor Clarence Moore. His preaching skills were shared with other churches in nearby communities. He served for four years as Pastor of the New Springfield Baptist Church in Alexander, GA outside of Waynesboro. He was also serving as Interim Pastor of the Zion Fair Baptist Church in New Ellenton, SC until the time of his transition.

As an educator, Reverend Brown was a former professor at Paine College here in Augusta. He also served as a reading teacher and a substitute teacher for the Richmond County Board of Education. He was a very a gifted and creative instructor in teaching ministries at Good Shepherd, including serving on the faculty of the nationally accredited Bible Academy Christian Leadership School, the Children’s Church Ministry, and the Annual Teaching Across the Ages Workshop.

In addition to being an outstanding educator, Reverend Brown was a gifted orator who applied his talents to working with the Good Shepherd Passion Play where he played the leading role of Jesus Christ. He also served as the show announcer for the “Bring it to the Table Real Talk with Angela C. Harden” television program. Additionally, Rev. Brown was blessed with a smooth singing voice and participated with the male chorus and the combined choirs of Good Shepherd. He was also a prolific writer and was making plans to publish his book.