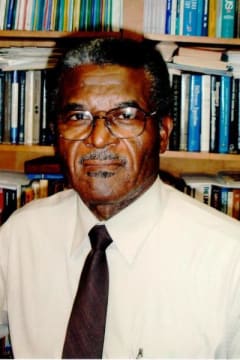 Dr. Wilbur Lee Smith was born on August 27, 1941 in Thomasboro, NC. He was the fourth child (of thirteen) of Howard and Essie Gause Smith, who proceeded him in death as well as brothers: Ronell, Kinston, Otis, Jerome, and Jimmy Smith; and sisters, Eunice McMillian and Elizabeth Miller. At a young age, Wilbur had an encounter with the Holy Spirit while riding a tractor in the fields on his family’s farm. He prayed so earnestly to our heavenly Father that gained his mom’s attention who felt that he had received a special anointing of the Holy Spirit. Dr. Smith was a family man and would strive to help anyone who had a need. You could count on him to be at family functions such as graduations, weddings, birthday parties, family reunions, or holiday gatherings. He had a quiet demeanor, but his words were full of wisdom, profound, and of great substance.

After the passing of his dad in 1957, when he was 16 years old, Dr. Smith took on the role of patriarch of his family and kept the family unit strong. Upon graduation from Union High School in Brunswick County, NC (1959), he matriculated at North Carolina A&T State University and obtained his Bachelor of Science (1963) and Masters of Science (1966) degrees in Mathematics. Desiring further education, Dr. Smith obtained his Ph.D. in Mathematics from Pennsylvania State University in 1968, being the second African American to earn a Ph.D. in mathematics from Penn State and among the first 50 African American Ph.D. mathematicians in the country.

Dr. Smith had a “green thumb.” Everyone marveled at his vegetable garden and prolific crops that yielded so much produce, he shared freely from the abundance. He kept his lawn very meticulously manicured and it was always lush green; it was the envy of the neighborhood.

In 1969, Dr. Smith married Flossie Louise Vereen and began their lives together in Greensboro, NC. To this union, one child was born: Wyatt Lee Smith who resides in Charlotte, NC. His true joy was to see his family happy and well taken care of, and he made that a life’s mission. He was a basketball and football dad, traveling widely to see Wyatt play sports from Page High School years to Duke University games.

Dr. Smith was a true educator, serving on the faculty at Fisk University, Tuskegee University, MIT, and UNC-Chapel Hill for several years. His love for teaching mathematics and NCA&TSU (Aggie Pride! Aggies Do!) led him back to his alma mater where he was Professor and Chairman of the Mathematics Department for over forty years. Dr. Smith never forgot to reach back; even after his retirement from NCA&TSU, you could find him at Aggieland inspiring and encouraging the next generation, having lunch with other faculty members, supporting the Alumni Foundation, attending football and basketball games or enjoying a theatrical production. Dr. Smith was a long-time and active member of The American Mathematical Society and The Mathematical Association of America and attended The Annual Joint Mathematics Meetings yearly. He spoke passionately about theorems, algebra, calculus, quadratic and linear equations, hyperboles, topology, and other higher mathematical functions.

In lieu of flowers, please make donations to the N.C. A&T State University Foundation Inc. Credit card gifts can also be made through our secure giving link by visiting https://app.mobilecause.com/form/uXONug?vid=gavv2 or mail checks to 1601 E. Market Street, Greensboro, NC 27411 or Text WSMITH to 41444. Woodard Funeral Home is in charge of the funeral arrangements.

Send flowers to the service of Dr. Wilbur Lee Smith