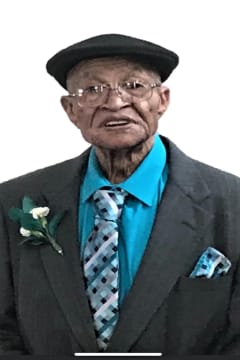 Bennie “Poppa” Alexander was born in Greenwood, Mississippi, Saturday, March 4, 1922, and was an only child. He was raised on a farm where he tended to the pigs and chickens. He also had a goat who ran around the porch and drove his adopted mother crazy. When World War II broke out, he lied about his age so he could get drafted into the military. He successfully served his country under General George S. Patton. After returning from the war, he started working for International Harvester which resulted in him having to move to Milwaukee, Wisconsin. His wife, Johnnie and family went with him. They were blessed to have six children, two of them, Carla and George, and his wife preceded him in death.

Once the foundry in Wisconsin was relocated, Poppa moved to Louisville and lived out his days here. He raised his children, helped with caring for many grandchildren and great grandchildren. Poppa liked to talk about the good old days of being back in Mississippi or his many dogs that he had over the years. His favorite dog to talk about was his “John Police”, as he referred to him, that he had in Milwaukee. Poppa would also talk about the war and how he joined the military to get out of Mississippi and off the farm, but later, he regretted that.

During his younger years, Poppa liked to BBQ when family would come to visit. He loved to cook a big meal for everyone. He also enjoyed packing up his wagon or van and taking the grandkids to Mississippi. There was nothing that made Poppa happier than to know family was coming to visit or when we were going to visit family. He cherished and adored all of his family. Even while sitting in his final days, he told his two oldest grandchildren he was going to come to Milwaukee this summer for a visit. What he truly looked forward to was a call or a visit from a family member.

Up until he was 94 years old, Poppa volunteered every Friday at St. Ignatius Martyr’s outreach with St. Vincent DePaul. He loved his church and his community. Every year he would sell raffle tickets for the church picnic which was held in July and work a booth. When his family attended, they were his pride and joy. He also had a joking rivalry with some of the other parishioners about who was the oldest.

Sadly on Thursday, March 11, 2021 at the tender age of 99, Bennie “Poppa” Alexander departed this life. He is survived by his children: Ben, Maron Sr. (Georgette); Ivory (Sarah); and Charmaine along with many grandchildren and great grandchildren. Poppa was a wonderful father, grandfather, husband, and friend to all that knew him. He was deeply loved and cherished by many and will be missed.

Send flowers to the service of Bennie Alexander

Honor the life of Bennie Alexander