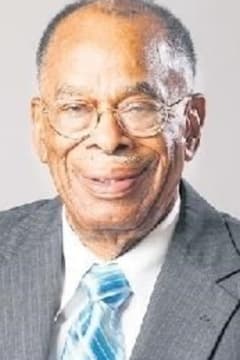 RIDGEL Gus. T., passed away Saturday, August 1, 2020. He was born July 1, 1926, to Herford and Emma Smith Ridgel in Poplar Bluff, Missouri. His early education was received in Poplar Bluff, graduating from Wheatley High School at age 16. After graduation he moved to Chicago, Illinois. Shortly after moving to Chicago, he enlisted in the United States Army, serving in World War II. Upon discharge, he enrolled at Lincoln University on the G.I. Bill, graduating Magna Cum Laude in three years in 1950. While at Lincoln, he became a member of Alpha Phi Alpha Fraternity. After graduation, Gus then became a test case with the NAACP as they challenged various universities' segregation policies. He was admitted to the University of Missouri, (Columbia) under court order, to pursue a M.A. degree in Economics in 1951. Unable to afford the two years of tuition/costs to receive this degree, he completed the two-year program in one year, becoming the first African-American to receive an M.A. in Business (Economics) from that institution. He later received a PH.D in Economics from the University of Wisconsin in 1957. He taught at Fort Valley State College and Wiley College prior to coming to Kentucky State College in 1960 as Professor of Business and Economics and later he became the Dean of the School of Business. In 1973, Dr. Ridgel became Vice President for Academic Affairs at Central State University in Xenia, Ohio. In 1975 he returned to Kentucky State and remained there until 1978 when he left to become System Vice President for Academic Affairs at Southern University in Baton Rouge, Louisiana. In 1989- 1990 Dr. Ridgel was Interim President at Barber-Scotia College. He returned to Kentucky State University in 1990 as Vice President for Business Affairs. He retired from Kentucky State 1998. He served as Special Assistant to the President at Kentucky State University from 2018-2019. Dr. Ridgel's life was one of high achievement and accomplishments. In 1996, he returned to the University of Missouri to receive an honorary Ph.D. (the university president joked that he didn't have to sue to get this one) and watch 20 students (Gus T. Ridgel fellows) receive advanced degrees. The University established the fellows program in 1988 to honor Dr. Ridgel. Dr. Ridgel was very active in Frankfort and Kentucky civic activities including many boards, commissions, and the Frankfort Economic Development Authority. Beside his lifelong devotion and involvement in local Alpha Phi Alpha Fraternity, he ran for National President. He was also an active member of Sigma Pi Phi Fraternity and a founding member of their Lexington/Frankfort chapter, Delta Tau. He was an active member of the Frankfort Grad Club until this club was dissolved. He was an active member of First Baptist Church in Frankfort, serving as Chairman of the Board of Trustees for a number of years. Dr. Ridgel was married for over 50 years to Dr. Gertrude C. Ridgel, a Kentucky State University Dean and stalwart of Frankfort civic activities. Gert preceded him in death in 2010. His parents and brother (Herford) also preceded him in death. His survivors include his sister Odera Pritchett, daughter Betty Bolden, nieces Debra Green, Lenore and Whitley King, a nephew Anthony Ridgel and extended family around Monticello, Arkansas. Services private. W.T. Shumake & Daughters Funeral Home in charge.

Send flowers to the service of Gus T Ridgel