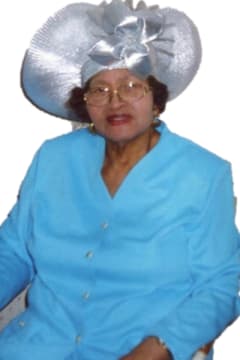 Imaree Greenleaf Hudson was born January 13, 1921, in Jefferson, Texas. He was the middle child of Otis and Katie Beaty Greenleaf. She married Willie March Hudson on April 4, 1937, and to this union three children were born—George, Shirley Ann, and Ray. They also cared for and raised Jimmy Davis, Alvin Davis and Jonell Davis Jackson.

After the family moved from Texas to Kentucky in 1943, they became members of the Church of Christ at 16th and Hale and later on, the Beech Street Church of Christ before it moved to the West Broadway location. While a member there, she served in many capacities which included teaching Sunday school and vacation bible school, working with the kitchen committee and helping the fundraising committee with their Southwestern Christian College’s National Dinner Day.

As an elder’s wife, she also would go with him to visit the sick and shut-in members. Imaree demonstrated her servant’s spirit as she graciously hosted college students and visiting ministers and their families when they came to town for gospel meetings and concerts. When her husband retired from eldership there, they moved to the east end of town and began attending Westport Road Church of Christ.

Primarily a homemaker, she loved cooking for and taking care of her family. She also supported her husband in his business endeavors by taking care of the contractual agreements and financial portions for his concrete business and rental properties.

Send flowers to the service of Imaree Greenleaf Hudson