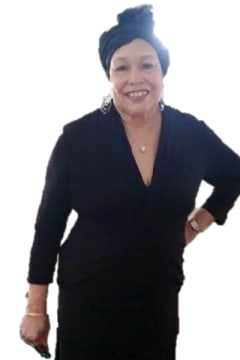 LaVern’s first employment experience as a Nurse, was at Scott-White Hospital in Dallas, Texas. After returning to Louisville, Kentucky, she continued utilizing her Nursing skills at the Old St. Joseph Hospital, located on Eastern Parkway. Not only did LaVern earn her Nursing Degree, but she pursued a degree in Paralegal, and was also a Registered Paramedic. She was not one to sit still. She ventured into avenues that would enhance her skills and give her an opportunity to explore other careers. Again, using her Nursing Degree, LaVern worked in a medical position at Ford Motor Company, and retired from Ford after 20 years of employment.

LaVern, or “Bonnie”, as she was affectionately called, confessed her faith in Christ, as a teenager, at Little Flock Baptist Church. She later attended Burnett Avenue Baptist Church. She then continued her Christian Walk at Canaan Christian Church, becoming a member in 1996. She was a faithful member of the Canaan choir and served as a Soprano Section Leader. She was also a 20 year choir member of the Messengers For Christ. She had such an unwavering love and praise for God.

LaVern met, and later married, Albert Harris III. To this union three children were born; Wanda Harris, Ricky A. Harris, and Albert Harris IV. Her most beloved union, was her marriage to Alonzo Beasley. To this united marriage in Holy Matrimony, Keiana N. Beasley, was born.

aunt, and a friend to everyone. She never met a stranger. Her tender heart, and loving spirit, embraced and befriended many, who were blessed to be in her presence. She may have been loving and nurturing, but she was also a strict disciplinarian. Being in the Marine Corps, certainly helped her to maintain structure within her home. She is considered a “Super Mom”. She lived a full life, and enjoyed every moment God granted her. Joyce Beauty Shop welcomed Ms. LaVern with open arms. She was the oldest client who came to the Beauty Shop to get “beautified”, and they loved her, as much as her family did.

With being a mother to everyone, LaVern still found time to enjoy the Cardinal Sport Teams, the South Carolina Gamecocks, and being in the company of her Great Grandson, Deshaun.

LaVern left a legacy for her children. They all can remember having to recite the 23rd Psalms, in the morning, and at night, before going to bed. That was LaVern’s favorite scripture. What a wonderful legacy to leave! To God be the Glory!

She was preceded in death by her parents, LaVern and Johnny Bond, brother, Herman Emery, and sister Joann Emery Reynolds.

LaVern, “Bonnie” will be missed!

Send flowers to the service of LaVern Elizabeth Bond Beasley