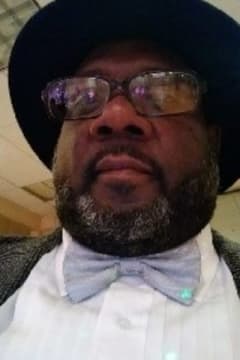 Terry was educated in the Clark County School system, and graduated from Jeffersonville High School. He followed his dream and became a long distance truck driver for over 13+ years, until he began to have health issues. He would frequently tell of his travels.

Terry’s Christian journey started as a young man, and he later united with Indiana Missionary Baptist Church, where he served as an usher on the Usher Board. He had such a warm and inviting smile when greeting members and guests entering the sanctuary.

Always putting others before himself, he truly loved his family and adored his mother and little brother. “Big Swan”, as he was affectionately called by family and friends, had a big heart and a natural caregiving ability.

He was the GQ of Jeffersonville. Whenever you would see him, he would be dressed to perfection. Whether he was in a suit, casually kickin-it with the boys, attending an event, or going to his dialysis treatments, you could be sure that his hat, clothes, and shoes matched.

On Saturday, November 28, 2020, Terry Lynn James at the age of 58, departed this life at Jewish Hospital. He was preceded in death by his father Jesse James, grandparents the Andersons, and great grandparents the James’, son, Josh, uncle, Sam Anderson, Jr., two aunts, Helen Lindsey, and Ruth Bess.

Send flowers to the service of Terry Lynn James