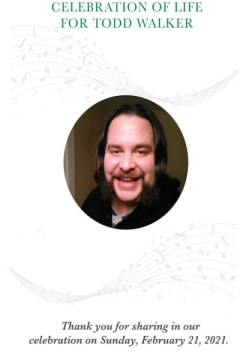 Celebration of Life will be held on Sunday, February 21, 2021 2:00pm at Grissom-Clark Funeral Home on the Lawn.

Todd Mathew Walker, 44, passed away in Atlanta, GA in the arms of his loving wife and best friend, Kelly, on Monday, February 15, 2021. Todd was born on November 29, 1976 to Matthew and Virginia Walker in Ridgewood, New Jersey.

As a child, Todd moved to Georgia from New Jersey. He graduated from Lassiter High School and attended Kennesaw State University. Todd took his gap year to pursue his love of music, exploring spirituality, visiting family, traveling to California and being one with nature.

Todd and Kelly’s first date began at the “Taste of Marietta Festival” on the Historic Square in Marietta, Georgia. This became a date that never ended. This first date, their friendship and enduring love will continue forever.

Todd and Kelly moved to New York City in March of 2003 and later wed in 2004 in Las Vegas, Nevada. Kelly and Todd began their family in 2005. They continued growing their family in 2008 and 2009 to complete the Walker family with three beautiful sons.

Todd began his career in 1995 and pursued his printing expertise until 2018. Two years ago, he transitioned back to his original love of music and began working along side Eric “Ricky” McKinnie and many members of “The Blind Boys of Alabama”.

Send flowers to the service of Mr. Todd Mathew Walker