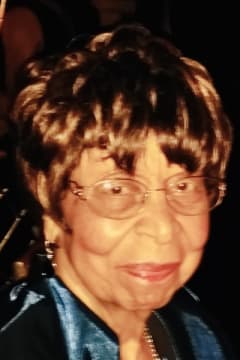 Lena Marie East Life-long East Orange resident, Lena Marie East, (89), born in Orange, New Jersey on March 18, 1931 to the late George Russell Banks and Ola Beatrice Banks (Smith) of Richmond, Virginia departed this life on Thursday, December 17, 2020 in Orange, NJ. Russell (as he was known) passed suddenly in 1938 leaving Beatrice, who would lovingly become known to her grand/great grandchildren as “Bea Bea” to raise Lena and her three older sisters; Althea, Winifred and Muriel. The four of them becoming known as the fabulous “Banks Girls.” Soon after graduation from East Orange High School, Lena and John R. East of New Brunswick, NJ married in September 1949. From this union three children were born; John Jr., Derek and Jacqueline. They were very proud parents with all three children graduating from HBCU’s. John and Lena belonged to a social organization called “THE CLUB” composed of over 35 couples of family members and friends, whom vacationed, travelled, socialized, and prayed together while addressing social issues and causes of the day. This was an integral part of “the village” which helped in the raising and mentoring of their young family for well over 50 years. In 1964 Lena became a school crossing guard for the City of East Orange assigned to the corner of William and North Clinton Streets where she served for 39 years safely and lovingly crossing generations of students on their way to and from school. Lena retired in 2003 and began to enjoy spending more time with her grand/great grandchildren . Over the years she enjoyed seeing the 100’s or 1,000’s of students who would come and say “Hi Mrs. East you used to be my crossing guard and my children’s too.” Lena Marie East peacefully transitioned to eternal rest in the early hours of a crisp snowy December morning. Lena was predeceased by the love of her life and husband of 52 years, John R. East, Sr. Lena was also predeceased by her sisters and brothers in-law; Althea Giles (William), Winifred Wilson (Elihu) and Muriel Brown (Louis), as well as son in-law, Waymon L. Hall, Jr. Left to cherish their memories of Lena are her children John R. East Jr. of North Brunswick NJ, Derek M. East Sr. (Angela) of Austell GA and Jacqueline East-Ross (Robert) of West Orange NJ; 7 Grandchildren, 5 Great Grandchildren and a host of nieces, nephews, cousins, other relatives and friends. A private family home going service will be held 11 am Wednesday, December 30, 2020 at St. Matthew AME Church 336 Oakwood Ave. Orange, NJ 07050 preceded by screening & socially distant walk-by viewing at 10 am. In lieu of flowers, please consider making a donation to the United Negro College Fund in Lena’s name. Arrangements provided by the James E. Churchman, Jr. Funeral Home. For service and live streaming information Visit www.churchmanfuneralhome.com

Send flowers to the service of Lena East

Honor the life of Lena East