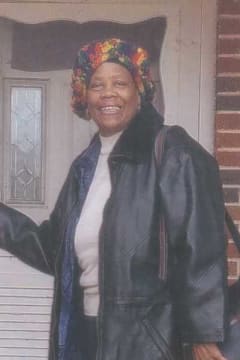 Mrs. Carolyn Russell Brown of Talladega, 74, passed away on February 9, 2021. There are not any funeral service arrangements to announce at this time.

Carolyn Russell Rogers-Brown, age 74, went home to be with the LORD on Tuesday, February 9, 2021, at her home. She was born to the late Dock Russell Sr. and Annie Wheeler Underwood-Russell on January 27, 1947.

Carolyn went to Westside High School in Talladega, Alabama, shortly relocating to New Jersey where she met and married the late Wallace Rogers, Jr. While pursuing her career in nursing she graduated from Bergen Community College and later remarried to Eversley Brown. Carolyn gave her life to God at an early age and became a member of Soul Saving Station in Paterson, NJ under the leadership of the late Pastor Gloria Floyd. She later became an active member of Soul Saving Station for Every Nation in Harlem, NY under the leadership of Reverend Jessie I. Winley. Carolyn relocated back to her hometown, Talladega, AL, where she remained until God called her home.

Carolyn is predeceased by her parents Dock and Annie Russell; three sisters, Peggy Hairston, Paulette Russell and Betty Jennings; and a bonus son, Ricky Brown. She was well known and loved by many.

~ Forever in our Hearts We Will Miss You ~

Send flowers to the service of Carolyn Russell Brown